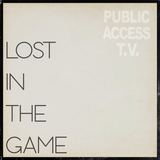 ’Street Safari’ has been produced by Patrick Wimberly of Chairlift, who has worked with acts including Beyonce, Solange, Blood Orange and MGMT.

PATV have been championed by radio tastemakers at Radio 1, 6Music, Radio X, Beats 1 and Amazing Radio and supported acts such as Weezer, The Strokes and Hinds.

PATV frontman John Eatherly on the track:
'Lost in the game' is a retrospective of our last teenage years after moving to NYC. 'Livin' that roach life' is how we referred to our conditions. Fifty dollars a week income fueling delusional self-indulgence. The golden years...'

In support of the album, the band head out on the ‘Street Safari World Tour’ in 2018, where they will play an extensive run of UK/IE dates in February (below).