TUNE The Magic Gang - How Can I Compete 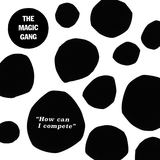 Tipped by Radio X, Apple Music’s New Artists 2017 and VEVO’s dscvr lists, Brighton quartet The Magic Gang kick-start the year with the brand new single ‘How Can I Compete’ which is out now. The single is the first release on Yala! Records, the new label / club night which was co-founded by Felix White of The Maccabees.

Premiered as MistaJam's Hottest Record in the World on Radio 1 on Monday 6th February 2017, ‘How Can I Compete’ is a shot of sunshine in these gloomy months as The Magic Gang deliver a spirited concoction of shimmering melody, bold pop choruses and swooning vocal harmonies. The track was produced by The Maccabees’ Hugo White and was recorded at London studio The Drugstore, famously once home to The Jesus & Mary Chain.

The Magic Gang take inspiration from the likes of Mac DeMarco, Weezer, Sean Nicholas Savage and Pavement, but the brilliance of their music is the way it draws from and builds upon the harmonic quality of classic pop’s most celebrated groups: the symphonic arrangement of The Beach Boys, or the enduring melodics of Frankie Valli and the Four Seasons, all of which is dusted all off with The Magic Gang’s own unique shine.

The Magic Gang – Kristian Smith (vocals/guitar), Jack Kaye (vocals/guitar), GusTaylor (bass) and Paeris Giles (drums) – have been living together in Brighton. Their current home – a knackered four-floor paradise not too far from the sea - is the ideal foundation for forging the powerfully melodic, groove-based music they’ve become known for over the course of their previous two releases ‘The Magic Gang EP’ and ‘The Second EP From’.

The connection between The Magic Gang and Yala! Records started last year when the band headlined the inaugural Yala! club night. Yala! is now firmly established as the capital’s hottest indie/alternative club night with sets from Happyness, Crows and Abattoir Blues while Florence Welch, Wolf Alice, Foals and Mystery Jets have all visited for guest DJ slots.

They’re now to embark upon a UK tour next month as the main support to Circa Waves before they head out on a Spring headline tour which also includes festival dates at Hit The North, Live At Leeds, The Great Escape and Liverpool Sound City: