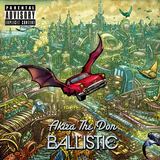 Welcome to Repo City State, where everyone's an asshole – even the air conditioners.

The writer, the artist and the rapper met at Morrisoncon at the Hard Rock Cafe in Las Vegas last autumn, where Akira, Darick Robertson and Grant Morrison were sat on a panel about music and comics, closing the rapturously received Happening with an impromptu cover of I Wanna Hold Your Hand. Later Adam Egypt and Akira explored the luxurious Temples of Luxor and bonded over a shared appreciation of esoterica and rap music. That they would all work together was as inevitable as it was the righteous thing to do.

Produced in fittingly bombastic style by Akira The Don, the lyrics of Ballistic were based on Adam's script, while series artist Darick Robertson completed the record with Cronenburgian flesh-weapon guitars that Akira noted when soloed in the mix, "sound like f*$ing Suede in a rocket or something."
Both the vocal and instrumental versions of Ballistic are available, the latter allowing said instrumentation room to shine.