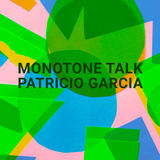 “In 2012 I read the book “Retromania”. In it, the music critic Simon Reynolds notices that in the last years, pop has been repeating its own near past without offering something really new, something I was noticing too by the time, then Reynolds manifests his longing for a new future pop music and he wonders how it would be like. Thinking about it I thought of a music that comes from House music as from a primitive rock’n’roll, like a new start but including the new sounds, and I composed the base for “Monotone Talk”. A rock’n’roll for the XXI century.

In 2016 I returned to this base with the idea of a “monotone talk”. I suffer in meetings and assemblies because I often realize that they’re rather chances to expose egos than to have actual constructive dialogue. I thought of making a song about
it, making politics, religious, journalists, Hollywood stars speeches “sing” through sampling. Speeches that sound empty and pointless to me. Among the ones I used are Hitler, Perón, Trump, Al Adnani, Cristina Fernandez, Tucumán’s governor Manzur, Emma Stone in an Oscar acceptance speech, King George VI and Marie Le Pen. I tried to use some others like the Pope, Argentina’s president Macri or Escriva de Balaguer but they came out as unsampleable for their lack of rhythm and clarity of speech, and had to let them out.

In June 2018, when the debate in Argentinean’s Congress about legalizing abortion was going on, and the congressmen exposed their point of view for a marathon 24 hours session, televised nation wide, I could hear lots of boring, pointless speeches, desperate attempts to somehow perpetuate clandestinity and death. I noticed I had monotone talk there to make a marmalade, so I added some of the most stupid lines and I knew the track was done.
I think this is part an attempt to give a point to these voices by transforming them to music, part a way to tell them “You may be my oppressor, but on my DAW you’re my puppet.”