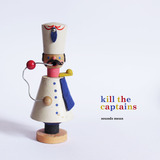 Leon Carter (Vocals, Guitar), Ric Booth (Guitar, Vocals), Giles Robinson (Bass) and Paul Collins (Drums) are the honourable Captains. Sounds Mean sees the band ramp up their brand of new-wave pop and suspense-filled rock’n’roll with shout-along choruses, fizzing dual-guitars and propulsive rhythmic skulduggery. Following on from 2010’s well received debut (Fun Anxiety), on Sounds Mean the band take to exploring such themes as dance floor puppet masters, sado-masochistic rumpy pumpy, corporate greed and - shrouded in geo-political metaphor - love. The album bursts opens with a bee in its bonnet. Picture a glutinous rich man in a Michelin-starred restaurant. Let's say he’s an investment banker (they're evil aren't they?) stuffing his face on course after course of perfectly sculpted pan-continental cuisine. He’s picking the bits caught in his teeth with the frail bones of a pensioner who lost their life savings as a result of the financial collapse he created. Throw in a smattering of Dick Dale and a pinch of Marr - that's ‘Umami’. Hot on its heels is ‘Refutenic’, the album’s meanest slice of thrumming basslines, rumbling drums, thrashing guitars and spat out prose. There's a new guy in town, and Kill the Captains don't like the cut of his jib. Not one bit. Despite what everyone else thinks about this silver-tongued cavalier, the Captains won't be having any of his nonsense. Fusing indie-laced XTC-ness with chugging krautrock-esque goodness, ‘The Trial’, demonstrates the band’s imaginative, left of centre intelligence and enviable way with a tune. Leon Carter wryly announcing; “Your prescription is ready make your way to the waiting room. Your feedback is valuable we'll swipe your loyalty card. It was tested on animals, with near matching DNA. If you have a reaction, use the survey to have your say. See you next time, enjoy your medicine, it will cure your contempt if you do what you're told.” A satirical musing on conveyor-belt consumerism, easily digestible products channelled straight to the mouths of sloth-minded consumers. Unchanging bass and driving drums reflect the relentlessness of the machine. Progressive in nature, ‘Share the Load’ blends Leon Carter’s distinctive and piercing vocals with melodic guitar-lines to create a real sense of tension, before exploding with duelling guitars and spine-tingling bass lines. Ambiguous in its lyrics, it can be read as a devastating power struggle between superpowers, or as a love-song cloaked in a geo-political metaphor. Either way, the outcome is mutually assured destruction. The album’s lead single, ‘Disco Nazi’, is a bass-driven stomper with an insistent beat that will get even the rhythmically challenged amongst us grooving. Sometimes whatever you do is never quite enough to satisfy the dance floor puppet masters, with their dance-floor dictatorships, sending out dictats to a room full of bodies who would happily dance without the extra encouragement. As the beats pump and the grooves swell, the tail grows like a Nokia snake chomping an unending supply of pixels. Elsewhere, ‘The Taking Of’ - a song about loss - provides the album with its most affecting piece - down-tempo and world weary. ‘Nowbiter’, however pummels home a fierce excursion in schizoid jangling power pop with svelte, progressive guitars married to a buzzing bass line. Ending the album on a high note, ‘Safety Words’ puts the ‘’umph’ into triumph with a sensitive musing on the confusing politics of lusty, sado-masochistic rumpy-pumpy. Kill the Captains could never say no to the noose – so long as it’s not tied too tight! Addictive and enthralling, Sounds Mean is the perfect accompaniment whatever your mood, whatever your circumstance. Released on Vinyl (with CD) and download from all good record shops and download services from Monday 12th August 2013 via Armellodie Records.