Back to Asher Quinn's Music <
Album 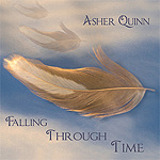 A word about the songs In March 2009, I gave a small acoustic concert at a church in Stroud, Gloucestershire, and in the audience was a young musician and sound engineer, Shaun Britton, who gave me a CD of his music to listen to. I liked what I heard, and some time later I asked Shaun to engineer and co-produce my next album. When that time came we agreed a start date, which was May 28th, 2010. I like to be precise about dates, so that future civilisations or aliens, who may discover this in a time capsule, can get an accurate sense of history about legendary rock icons and international sex symbols such as myself. Both my fans support me in this. My original plan was to compose and record maybe eight new songs, and sing some more of my favourite traditional songs as well. My working title for the project was 'Fireside Ballads'. I had planned to start with 'The house of the rising sun', but on the morning of the first recording I awoke with a new song almost complete in my head, as if from a dream, and I completed it, mentally, on the drive down to Shaun's studio, in Fareham, Hampshire. I called this new song 'Everything is in God', and remembered that those words appeared in a song of Van Morrison's entitled 'When will I ever learn to live in God?' They must have been cooking inside me for quite some time. Much of this album was recorded between the end of May and the end of October, in a largely sunny, warm and dry summer… quite Mediterranean in fact (more information there, for aliens or future civilisations. I may eventually include a few temperature statistics for them). The early morning drive down to Shaun’s, usually on a Friday or a Sunday, was invariably summery and rather holiday-ish, climbing up to the sub-alpine Devil’s Punchbowl at Hindhead, and then freewheeling down through the Hampshire downs to catch a few glimpses of blue sea near Portsmouth. As October approached, the Devil’s Punchbowl’s treetops became shrouded in a gothic mist and the temperature plunged excitingly, but every day we recorded seemed to be a sunny day. Very quickly the project gathered a spirit all of its own. I wrote three songs in ten days, or rather three songs wrote me… they were 'Visions', 'Falling through time' and 'Blessings on your soul'. At this point it became clear to me that the album itself wished to be called Falling Through Time, which seemed to be an appropriate concept, because it both covered the mystical sense that eternity somehow desires to communicate to our mortal souls, bringing tidings of comfort and joy, and also that some great traditional songs are timeless stories about the essential ingredients and dramas of human nature, just like myths, fairy tales or dreams, but set to music. Interwoven for me between composing, family and working life, and watching the world cup, were these quotes which I found very inspiring: ' I see this life as a conjuration and a dream. Great compassion rises in my heart for those without a knowledge of this truth.' - MILAREPA