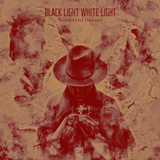 
Rolling in fresh off the waves of their latest single, “High Like A Hurricane”, Black Light White Light is set to return with their aforementioned new album “Gold Into Dreams,” to be released 6th Ocotober across the UK and Europe. Produced by the talents of Chris "Frenchie" Smith (Jet, The Dandy Warhols) as well as guest performances from Grammy Award-winning string arranger Davide Rossi (Coldplay, Goldfrapp), the band has gone on to supporting the likes of internationally renowned band The Telescopes (UK), Crocodiles (US) and Crystal Antlers (US) whilst gaining heavy support from Artrocker, Big Cheese, BELLA UNION’s label owner Simon Raymonde of the Cocteau Twins and Amazing Radio.

Black Light White Light were formed in 2009 by guitarist, singer and composer Martin Ejlertsen. After some overlap and changes in the band's line-up he is now primarily joined by brothers Adam Winberg (drums) and Tobias Winberg (bass). From the beginning, Black Light White Light had an international outlook, seeking inspiration and collaboration over long distances. Their debut EP "Directors Cut" released in 2010 was recorded in Gothenburg, Sweden with producer Johan Forsman (The Soundtrack Of Our Lives, Jens Lekman, Haakan Hellström). Later that year the band went to Los Angeles, CA to record the debut album "Infrared Daylight" with American producer Rick Parker (Black Rebel Motorcycle Club, The Dandy Warhols, Von Bondies, Miranda Lee Richards) which was released on the band's own imprint Record Records on September 26, 2011.

Coated with infectious melodies that reflect a sense of optimism there is an irresistibly alluring quality that captivates our attention and seduces our enthusiasm. A musical approach that expresses an excitement for experimentation and lengthy instrumental passages. Reminiscent of classic psychedelic rock acts like The Byrds, Jefferson Airplane and The Seeds we can't overlook the fact that parallels can also be drawn from the more British/ Manchester leaning sounds whilst embracing a more abstract agenda.

“Gold Into Dreams” revises the band's love for classic rock with a heavier focus on the more experimental, psychedelic rock and offers 12 new songs wrapped in rich melodies, adventurous soundscapes and instrumental hook lines. “Gold Into Dreams” was recorded in Copenhagen with the support of Chris ‘Frenchie’ Smith (Jet, The Dandy Warhols, Trails of Dead, Smog) from Austin, and Danish / Iranian sitar player Atusa Zamani (on the song “And The Devil”). The album was mastered at The Lodge, New York City by Emily Lazar, the first female master technician, who has won a Grammy for her work with Foo Fighters' album "Wasting Light" and has also worked with artists like David Bowie, Vampire Weekend, Garbage, The Raveonettes, Lou Reed and Morrissey.