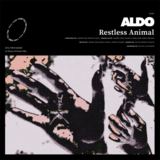 The Brazilian duo Aldo, comprised of brothers Andre and Mura Faria, today release their new single and video, “Restless Animal”. With lyrics based on the concept of a panic attack and a video filmed in chaotic downtown São Paulo, the track is their first music since last year's debut EP, Trembling Eyelids, and is out today via Full Time Hobby. The band said the following about the music: "When you are in São Paulo for a long time, you see people having all kinds of urban-tech-pollution-traffic-mental-disturbances (including us), and don't even realise it. When we were writing this song, we isolated ourselves for 10 days in the middle of São Paulo’s downtown near where we grew up. We rented a loft at Praça da República, brought all our synths, pedals and instruments and started a daily routine - writing all day, dinner and drinks, then writing all night. We started writing about the people we saw from our balcony and we breathed in the polluted air of São Paulo." About the video, which was directed by the up-and-coming São Paulo-based creative director Gondrs Cavel, they said: "We wanted something visceral, organic and different. We love Gondrs' unformatted 90’s-gothic-digital-anti-pop style but originally didn't understand his treatment for the video - something involving three sleeper bunk beds in a hacker’s mafia community trying to kidnap a girl in the middle of São Paulo - but it sounded exactly like what we wanted! We knew it would be a challenge to make it happen, in terms of logistics and budget, so we filmed it downtown over 3 x 20 hour days of shooting, using studios, streets and friends' homes. What intrigued us was the look that Gondrs proposed… completely different from our last music video but with the same DNA: The São Paulo vibe, chaos, the unformatted logic, the traffic and carbon atmosphere… but all dressed in a unique aesthetic. We were totally out of our comfort zone relinquishing control and trusting his creative vision but love the results". Aldo was formed by São Paulo-based brothers in honour of their uncle Aldo. A once wayward character, Aldo used to live an edgy lifestyle and would bring his young nephews out on trips into the city’s dark underbelly, introducing them to scenes of illegal car racing, back-alley negotiations, football gang violence and carnival parties, all drenched in alcohol. The wide-eyed brothers took it all in, and later, would use these youthful experiences as inspiration for their unique sound. First though, they needed their uncle’s blessing. Now a changed man, Aldo had turned his life around and embraced the Church. The idea of his old life and misdemeanors being given new focus brought about family arguments and upset. Andre and Mura, however, persisted. After much convincing, uncle Aldo eventually consented with a broad smile, and Aldo was born.