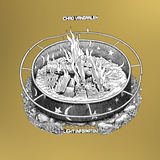 Chad VanGaalen will release Light Information, the creative polymath’s sixth album, on CD / LP / DL / CS on September 8th via Sub Pop (and Flemish Eye in Canada). Today he shares the first track, “Old Heads”, and announces a string of European tour dates including London and Leeds. “Nobody cared about their old heads, because the new ones work just fine now, don't they?.... they have the same size mouth and eyes.” This new song, “Old Heads”, is a sci-fi space anthem to technology that constantly replaces itself, proving both necessary and unnecessary at the same time. It’s also a jangly pop gem, a trip through the fantastical that is ultimately warm and relatable. This remarkable coexistence is one of many achievements of Chad VanGaalen’s Light Information. 'Old Heads' on Youtube - https://youtu.be/eGjGa_2S1Yw For an album that’s about “not feeling comfortable with really anything,” as VanGaalen says, Light Information is nonetheless a vivid, welcoming journey through future worlds and relentless memories. The rich soundscapes and sometimes jarring imagery (“I’ll be the host body, yes, for the parasitic demons. They can eat me from the inside out, I already hear them chewing.”) could only come from the mind of a creative polymath--an accomplished visual artist, animator, director, and producer, VanGaalen has scored television shows, designed puppet characters for Adult Swim, directed videos for Shabazz Palaces, Strand of Oaks, Tanya Tagaq, METZ, Dan Deacon, and The Head and the Heart, and produced records for Women, Alvvays, and others. While alienation has always been a theme of VanGaalen’s music, Light Information draws on a new kind of wisdom--and anxiety--gained as he watches his kids growing up. “Being a parent has given me a sort of alternate perspective, worrying about exposure to a new type of consciousness that's happening through the internet,” he says. “I didn’t have that growing up, and I’m maybe trying to preserve a little bit of that selfishly for my kids.” As always, VanGaalen wrote, played, and produced all of the music on Light Information (save Ryan Bourne’s bass part on “Mystery Elementals” and vocals on “Static Shape” from his young daughters Ezzy and Pip), and designed the cover art. The product of six years’ work, going back even before 2014’s Shrink Dust, Light Information emerged from the experimental instruments that fill VanGaalen’s Calgary garage studio. Among them is a beloved Korg 770 monosynth, which VanGaalen coveted for years before fixing one up and devoting a lot of recent energy to recording “duets” with it. One of these, “Prep Piano and 770,” is the lone instrumental on Light Information, more atmosphere and chord bursts than the rest of the album’s hooky rock narrative. “If I was going to go out and buy a record, I would probably want it to sound only like that,” says VanGaalen. “That one’s for me.” Throughout the dark-wave reverb of Light Information are stories of paranoia, disembodiment, and isolation--but there’s also playfulness, empathy, and intimacy. “I sit and do a drawing, a portrait of my dad,” sings VanGaalen on “Broken Bell.” “I should really visit him before he is dead. Cuz we are getting old. Our cells just won’t divide like they told us. But I’m not really good at this kind of thing.” But VanGaalen is good at a lot of things--and he’s trying to pursue them for the right reasons. “I'm just trying to get over the weight of feeling like I have to be making something of my time constantly,” he says. “Especially with kids, you get these small breaks where you get to make stuff, and now I try to say ‘you know what, I'm going to make something for me.’” And if he could make anything for himself, it would be without constraint. “I would love to build a living structure from scratch,” he says. “I've slowly been ripping my studio apart and building additions, but you're always kind of down to this box. I’d love to explore more open forms of architecture, with an endless supply of materials to use, even garbage. Building codes keep us in these boxes--You can't just build a giant hand made out of wood that's the size of a house to live in. But we really should be able to do that.” Light Information is available for preorder now from Sub Pop and Flemish Eye. LP preorders of the album from megamart.subpop.com will receive the limited Loser edition on crystal clear vinyl. There will also be a new T-shirt design available. The limited Loser edition LP will also be available from select UK independent retailers on clear vinyl. Chad VanGaalen live dates: Europe Oct. 15 - Utrecht, NL - EKKO Oct. 16 - Rotterdam, NL - Rotown Oct. 17 - London, UK - Oslo Oct. 18 - Leeds, UK - Brudenell Social Club Oct. 20 - Hamburg, DE - Molotow (Sky Bar) Oct. 21 - Copenhagen, DK - Stengade Oct. 22 - Berlin, DE - Kantine am Berghain Oct. 24 - Düdingen, CH - Bad Bonn Oct. 25 - Lyon, FR - Le Sonic Oct. 26 - Amiens, FR - La Lune des Pirates Oct. 27 - Paris, FR - Point Ephemere Oct. 28 - Nantes, FR - SOY Festival Oct. 29 - Tourcoing, FR - Le Grand Mix Oct. 30 - Luxemburg, LU - Rotondes Oct. 31 - Gent, BE - BIB North America Nov. 09 - Vancouver, BC - The Biltmore Cabaret Nov. 10 - Seattle, WA - Sunset Tavern * Nov. 12 - Portland, OR - Doug Fir * Nov. 14 - San Francisco, CA - The Chapel * Nov. 15 - Los Angeles, CA - Satellite Club * Nov. 16 - San Diego, CA - Soda Bar * Nov. 17 - Phoenix, AZ - Valley Bar * Nov. 19 - Denver, CO - Hi Dive * Nov. 20 - Salt Lake City, UT - Kilby Court Nov. 30 - Toronto, ON - Lee’s Palace Dec. 01 - Detroit, MI - El Club ** Dec. 02 - Chicago, IL - Empty Bottle ** Dec. 03 - Indianapolis, IN - The Hi Fi ** Dec. 05 - Pittsburgh, PA - Club Cafe ** Dec. 06 - Brooklyn, NY - Rough Trade NYC ** Dec. 07 - Allston, MA - Great Scott ** Dec. 08 - Montreal QC - Fairmont** *w/ NE-HI **w/ Un Blonde