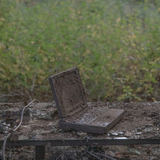 Liverpool born and LA-based producer and vocalist KUČKA proudly shares visuals for new single “Real”. Produced by KUČKA with additional help from Chance the Rapper and Kid Cudi collaborator Nosaj Thing, “Real” continues KUČKA’s streak of synthetic and percussion-heavy R&B, all centered around her delicate, ASMR-esque voice. The track speaks to the uncanny power of human connection, a link capable of establishing itself even through the digital maze of the internet. The visuals place our vocalist in the middle of a forest, where she excavates a number of objects from the soil. The deeper she digs and the later it gets, the more surreal her surroundings become. Droning synths and measured beats further mystify the setting, creating a sense of uncertainty and wonder as she sings “Think of your ultimate fantasy/ Think it and let it impossibly be, real.” KUČKA explains how the song celebrates the power of imagination as a form of healing: “Real is about how important the imagination is in connecting to yourself and your needs. We are living in a world where we are constantly stimulated externally - but this can feel shallow after a while. I want to encourage people to lose themselves in their ideas, to really go deep, no matter how weird or unusual they think they are, and see how it affects their physical body and gives way to even more potent thoughts.” “Real” follows KUČKA’s previous single, the Flume-assisted “Drowning”, a track praised by the FADER, Ones to Watch, FACT Mag, and more. About KUČKA Laura Jane Lowther’s list of achievements are endless. She boasts and co-writes with Flume, SOPHIE, Vince Staples, A$AP Rocky, Cosmo’s Midnight, and more, and has performed globally supporting the likes of The xx, Mura Masa and Mount Kimbie. With her varied production and performance credits, Lowther firmly established herself as a standout female producer and vocalist, and now she focuses that talent on herself. Turning to writing for catharsis, KUČKA has worked on new music with Vegyn, Baauer, Flume, and Nosaj Thing. Lowther is also the newest signing to LuckyMe.