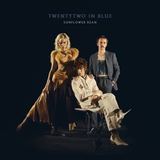 New York trio Sunflower Bean (Jacob Faber, Julia Cumming and Nick Kivlen) will release their second record on March 23rd. Showcasing a gentler side of Sunflower Bean that’s on display on Twentytwo in Blue, “Twentytwo” is about fighting back against society’s expectations and generations of abuse by men in power. “Busted and used/ That’s how you view your girl/ Now that she’s 22,” sings bassist and vocalist Julia Cumming. While it’s timely with the recent cultural reckoning, “Twentytwo” shares a powerful and enduring message about resilience and fighting through the expectations put on you as a young adult, especially as a young woman. As Cumming puts it, “You prevail.” Sunflower Bean are taking Twentytwo in Blue on the road this year with tour dates throughout the US, Europe and the UK. See below to find a show near you. Sunflower Bean will release Twentytwo in Blue on March 23rd - when all members of the band will be 22 years old - and comes almost two years and two months after the release of their critically acclaimed 2016 debut album Human Ceremony. Co-produced by Unknown Mortal Orchestra’s Jacob Portrait (who also mixed the record) and HC-producer Matt Molnar of Friends, Twentytwo in Blue shows Sunflower Bean stay true to their guitar band core and classic rock-inspired roots, while exploring new sonic textures with more direct and progressive themes. Unlike their debut, which was essentially a compilation of songs Sunflower Bean wrote while still in their teens, Twentytwo in Blue was made in the year between December 2016 and December 2017 and showcases how far the band has come since playing together in their high school days. Tour dates: 23/3 - London, UK @ Rough Trade East 24/3 - Nottingham, UK @ Rescue Rooms 26/3 - Norwich, UK @ Open Norwich 27/3 - Birmingham, UK @ Hare and Hounds 28/3 - Newcastle upon Tyne, UK @ Riverside 29/3 - Leeds, UK @ Wardrobe 30/3 - Manchester, UK @ Gorilla 31/3 - Liverpool, UK @ Substation 01/4 - Glasgow, UK @ Stereo 03/4 - Bristol, UK @ Thekla 05/4 - Brighton, UK @ Concorde 2 06/4 - London, UK @ Koko