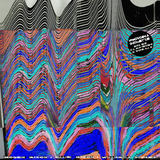 London trio Wovoka Gentle return with their striking new single ’Sin Is Crouching At Your Door’, and have announced their much anticipated debut album - ’Start Clanging Cymbals’ which is due 7th June via NUDE Records. After releasing singles '1,000 Opera Singers Working in Starbucks', which was included in the official soundtrack of FIFA 19, and 'Peculiar Form of Sleep' at the end of last year, they share a new track from their upcoming debut. Of 'Sin is Crouching At Your Door', a psychedelic piece of cinematic experimental pop, the band say: "It could maybe be seen as the soundtrack to a sense of dread, a sense of being out of control. Tuning all the strings of your guitar to D and thrashing as hard as you can to try and regain the feeling that things can make sense. You then look within yourself, though, only to find desolation and destruction disguised as creativity; the metropolis has been bombed by individuals, and the only escape hatch down below leads to the middle of the waste land. Hopefully you don’t end up where you began." After having played their biggest London headline show to date at the Institute of Contemporary Arts last November, the band have confirmed a show with Submotion Orchestra at London's EartH in February as well as a full European and UK tour in the Spring in support of Malena Zavala. More shows will be announced soon. Supporting Submotion Orchestra: Fri 15th February - EartH - London, UK Supporting Malena Zavala: Sun 14 April - Maze - Berlin, Germany Mon 15 April - Prinzenbar - Hamburg, Germany Wed 17 April - Trefpunt Concertzaal - Gent, Belgium Thur 18 April - L’Olympic Cafe’ - Paris, France Tue 23 April - The Louisiana - Bristol, UK Wed 24 April - The Moth Club - London, UK Thu 25 April - The Blue Moon - Cambridge, UK Fri 26 April - Sound Basement - Liverpool, UK Sat 27 April - YES - Manchester, UK Wed 01 May - The Boileroom - Guildford, UK Thu 02 May - The Blue Arrow - Glasow, UK Wovoka Gentle are an experimental three-piece from London, comprised of William Stokes and twins Imogen and Ellie Mason. Taking its root in folk and Americana songwritng, the Wovoka sound draws upon the psychedelic soundscapes of the late 60s as well as contemporary experimental, pop and collage music; marrying classic instrumentation with sampling, analogue synthesis and sound manipulation.