Back to Cabinet Of Millionaires's Music <
Single 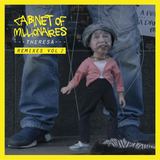 Cabinet of Millionaires “Theresa” Remixes Volume 2 (Chocolate Fireguard). 1. Theresa (Original) 2. Theresa (Zion Train remix) 3. Theresa (Danny Styles remix) 4. Theresa (Indus Traps remix) 5. Theresa (Hostile Environment mix) notes: ZION TRAIN REMIX (release date 29 March 2019) Deep sinister dub vibes from the mighty Zion Train. Their Theresa remix for the Cabinet of Millionaires is a brutal take down of Theresa May and her Government’s austerity programme. More often found on drum and bass anthems for labels like Hospital, Shogun, Ram and Spearhead and artists including Technimatic, London Elektricity and Camo & Krooked, its a return to Zion Train’s treatment table for singer Pat Fulgoni having in the naughties contributed the smash “Do U See Love?” for ZT’s acclaimed “Original Sounds of the Zion” album and gigging with them at festivals including Glastonbury, Essential in Bristol and Popkomm in Berlin. Zion Train continue to raise the bar and recently celebrated their 30th anniversary with a World tour and numerous releases. Long may they continue …. A solid release package, Volume 2 also features remixes from original Junglist Danny Styles, rising future breaks stars Indus Traps and a rather wet and windy mix called the Hostile Environment. WATCH THE VIDEO HERE www.youtube.com/watch?v=NfxxUm_0Kgg <- 👀 "Theresa is certainly no love song to the prime minister – but undoubtedly a formidable piece of protest dance-rock... With a passionate vocal performance, rich fuzzy synths and pounding drums, Cabinet of Millionaires have produced a banging protest song that’s sure to get everyone moshing at their next gig" – Bbc Radio 6 Tom Robinson’s “BBC Fresh on the Net” show "Farcical, impassioned and addictive to listen to, hopefully this will become a much-played ear worm that will wiggle its way into the minds of many, moving them onto the streets" – Examiner Live "The kind of dance music that DJ's like Andy Weatherall would turn people onto or the Talking Heads would delight the New York uber cool clubs with" – Eddie Gordon (BBC Essential Mix) "Theresa' by Cabinet Of Millionaires could not be more timely, right now. Haunting beats. This would sound brilliant on the radio" – The Zine UK "Cabinet of Millionaires finds grounded sound in disco/dance territory with listeners only too happy to follow them there. Beats, drive, a deep soulful voice, and genuine vocal delivery with an important message echoing the sentiment of millions... The cool, rhythmic grooves and slickly fast pace make the pointed lyrics go down smoothly, while the expressively exclaimed lyrics get the message across loud and clear" – Big Takeover Magazine (USA) SOCIAL MEDIA www.twitter.com/cabinetmillion www.soundcloud.com/cabinetofmillionaires www.facebook.com/CabinetOfMillionaires www.instagram.com/cabinetofmillionaires SHOP www.cabinetofmillionaires.bandcamp.com