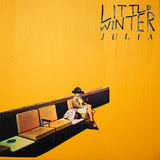 The dynamic quintet shines through the nordic clouds with sixties-inspired, colorful songwriting on their forthcoming album ‘WONDERLOST’ set to release on January 22nd 2021 via Celebration Records. New indian summer-single “Julia” is streaming now!

“Julia” marks the beginning of the Aarhus-based band’s journey towards a new sound and aesthetic. Displaying a warm blanket of soothing, poppy melodies, old-school tape-fluttery production, and playful choir arrangements, this first taste of the upcoming album is a refreshing, contemporary take on the sincere songwriting emanating from the Californian shores with an added pinch of Scandinavian melancholy and dreamy 12-string The Byrds-esque guitar riffage.

Heartbreak at the core
Both melodically and lyrically, “Julia” encapsulates youth, the adolescent mind and teenage love.  Lead-singer Nikolai Ryan describes the song as: “an ode to the first love and the jumble of feelings that it entails. Especially the letting-go part can leave you in a puzzled state of mind for years to come. The intrinsic tale of “Julia” originates from the story of my first relationship and subsequent break-up, but figuratively it’s about all the ‘Julias’ out there.”

“Throughout our lives, we all have to part ways with people we used to love and sometimes we think back on what went awry, how the significant other is doing in the now, and what would have happened had we stayed together,” Nikolai adds.

Though “Julia” draws on the metrics of a typical love song, it moreover salutes the warming nostalgia and remembrance of the ever-changing world around us. With a sharp eagle's eye view of one’s maneuvering in a world feeling ever-so pulsating and vivid, “Julia” encompasses all this in an anachronistic manner which feels very welcoming to the listener. “It was very important for us to have these feelings reflected in the sonic universe alongside the adolescent vibes; having the song make you think back on the things you once held dear and subsequently lost and felt somber about, but in the end okay, even elevated” bassist Martin Welling reveals. “As we grow, perspectives change like the rhythm of the world around us. Balancing the fine line of keeping in touch with your past and wilfully forgetting is a fine art, and we wanted to put this into the spotlight because as the refrain goes: loving is so easy when you’re young,” he concludes.

Bringing the idols into the frame
The mixing of “Julia” fell into place at the hands of Oslo-based Simen Hallset (lead singer of Norwegian psych pop-darlings Gold Celeste). “We felt that Simen’s mixing-portfolio at large encapsulates what we wanted the Wonderlost LP to emanate, so getting in touch with him felt completely natural, although kind of scary at first,” guitarist Alexander Mirz explains; “To have the lead singer of one of your favorite bands give our music its final touches is pretty surreal to us. But with the blessings of modern technology, we have been able (and as an additional bonus even under Corona-friendly circumstances) to have video meet-ups with Simen which have served as a great foundation for our common understanding of where we could take the track. It sure is a dream come true!” Alexander adds.

The recording of “Julia” along with the rest of “Wonderlost”, which spread out over almost a full year, mainly took place at the legendary Feedback Studio near the docks in downtown Aarhus; a site beknown to many Danish/local musicians as the place where Danish artists like The Broken Beats, Peter Sommer, VETO, and many more have set foot. “The atmosphere in the studio was very special knowing who had recorded there previously,” Alexander tells.

Sonically, the choice to record at the Feedback Studio turned out to be crucial to Little Winter’s new sound: “analog gear is a great factor in attaining the sound that we so adore, hence the palette of vintage microphones, a ridiculously good sounding outboard setup, and masterful maneuvering/engineering of it by Magnus Vad was undoubtedly the optimal choice for us. We really cannot wait to show the rest of the record to the world. There are some real treats on the record that we cannot wait to get out there,” the five young men agree.


About Little Winter
The music of Little Winter is an homage to the sunkissed beach vibes of the space age. Mix this with the DIY sounds of today’s indie scene, add dripping synthesizers  and you’ll end with the colourful cocktail  ‘WONDERLOST’ - the quintet’s forthcoming debut album. The collection of 12 songs tell a story of feeling lost in a grand, ephemeral world.It all revolves eternally around the inherent motivation behind ‘Little Winter’; a testament to the small winters we all endure to find our place in the world. Little Winter are long-time friends Nikolay Ryan, Alexander Mirz, Nikolaj Sodemann Johansen, Daniel Clifton and Martin Welling.

WONDERLOST will be out January 22nd on all streaming platforms and limited 12” gatefold vinyl LP.