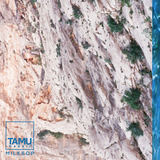 “A “milksop” is a person who is indecisive and lacks courage. The song is about the most extreme example of someone being a coward imaginable. It's loosely based on a story I heard about a guy and a girl with a suicide pact. They had agreed to throw themselves from the top of a cliff – but only she jumped. I thought that was just so tragic and cowardly.

It's so appalling there's a metaphorical aspect to it. Letting someone down, or feeling let down are things we have all experienced – albeit hopefully not to the same degree.

'Milksop' deals with the overarching themes of the album: death and love. “Little Death Summer” is a double entendre. Despite a lot of references to death, I didn't want it to be an abject listening experience. It's intended to be more nuanced than that: soaked in something more melancholic and naïve. Thinking about death, but grateful for life in the first place.”
Nearly all the songs were written during the summer, or at least nostalgic for that time of year. Ruminating on the process, Tamu confesses “I set out to write an album about death, but instead it ended up reflecting a different chapter of my life…” His talent for finding beauty in the obscure and the intimate is evident throughout the album. Previous single ‘Senses’ is built up from recordings he took on his phone of some Italian friends, drunkenly arguing about Brexit; and ‘Niobe’ is an examination of our ability to take responsibility, or not, for events we seemingly have no control over; both demonstrating an astute perspective of the human condition.

Taking his moniker from the world’s largest volcano, discovered under the sea only 5 years ago at the same time as he was formulating the project, Tamu Massif enjoyed the idea of something so great being undiscovered for such a long time. He has always written and recorded surrounded by water, whether in his childhood home of Weston-super-Mare or in Naples or the Lake District. Those bodies of water are a constant in the flow of his music, also featuring heavily in his visuals.

Garnering attention over the course of two earlier EPs, Alba & Bala, as well as tours with the Japanese House, C Duncan and Shakey Graves and for producing much of Fenne Lily’s debut; Tamu is admired for his talent at gathering and warping field recordings as much as for his gift with harmonies and a distinct deep growl in his vocal. He embellishes his production, collecting sounds from his surroundings and using a phone to steal conversation from strangers and even a purring cat. Teaming up once again with long-time ally Ali Chant (Youth Lagoon, Perfume Genius, Aldous Harding) for his mixing sensibilities, the final result is not something as sparse or lo-fi as its parts, and instead feels beautiful, bold and unique.

The debut album Little Death Summer from Tamu Massif is due 29th March 2019.