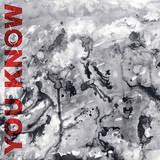 Forged within the walls of Leeds’ DIY collective space Chunk, HAMER are the embodiment of your noisiest, fuzziest + most debaucherous dreams, a relentless wall of psych-garage noise with regular trips into speed-psych. Having infiltrated the Leeds music scene with their infectious energy, frenzied riffs, ferocious drum blasts & attitude, they plan to wreak further havoc with their self-titled debut album, set for release later this year. The album is a diesel powered, fully cranked, relentless beast akin to Thee Oh Sees, Ty Segall + METZ at their most ferocious. The foot never comes off the pedal, throwing more + more at you until you’re a quivering mess. Taking on topics including friendships damaged through casual sex, unlocking your own potential, a plea for brain activity to relent and an attack on narrow-minded supremacists. The sound of the album is a reflection of the bands breakneck live shows, somewhere the band really come into their own with HAMER’s provocative stage presence chewing up every element of punk/psych/garage rock & spitting it back at you through heavy distortion & raging vocals. The album available as a special vinyl edition on a clear, transparent coke bottle green + rosa purple vinyl. It is limited to 100 copies + available to order from www.cluerecords.com. It was recorded and produced by frontman Hamish. The band is made up of Hamish Watts (vocals and guitar), James Tkaczyk-Harrison (bass) and Thomas Shuff (drums). HAMER’s self-titled debut album is released on 25th October. The album will be released via Clue Records (Crushed Beaks, Avalanche Party, PLAZA, Van Houten, LOCALS) and is available to order from www.cluerecords.com. FFO = Thee Oh Sees, Iggy Pop & The Stooges, Black Sabbath, Pigsx7, Ty Segall, METZ, Jay Reatard, Sonic Youth, Shellac