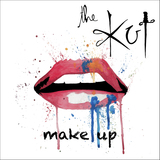 Kerrang! Magazine "despite the loud Courtney Love references they're more than just Hole II. Mario has an Against Me! Strut to the intro, while DMA is a pounding gem" Metal Mouth "If they can fulfill their early promise, then The Kut could end up being a big name in no time at all." 8/10 Hit The Floor Magazine "[No Trace] epitomises the girls’ influences from the likes of Nirvana and Incubus, displaying their no messing around approach to modern day grunge and taking us back to the early 90′s, where grunge rock was at it’s best!" SWNK Magazine "No trace, the opening song on The Kut’s Make up EP, has a big chance of being the most played song this summer. Awesome stuff!" Alt Dialog "It’s almost as if Soundgarden and Hole were put into a blender with The Kut being the result.” Ultimate Underground "They are equal parts L7 and bands like Placebo. They even show influences of Nirvana without being a retread and falling prey to the familiar." Seba-Rashii Culture "When we first heard The Kut, we knew that the London based trio were going to be worth keeping a careful ear on. Our patience has been rewarded with the release of the Make Up E.P!" Uproar Webzine "Known for their enthusiasm and uncontrollable energy on stage, The Kut have created quite a crazy fan base who as you would expect are ecstatic over the release of their new EP, Make Up." Peek-a-boo Magazine “The Kut present a sonic collage that evokes everything that made the 1990’s alternative rock scene such a beautifully broken beast” Tasty Fanzine "‘Mario’ has guitar hook similar to Trey Spruance era Faith No More and an awesome ending. ‘Closure’ and ‘DMA’ are equally noteworthy and the whole EP is impressively polished. Bravo The Kut." 7/10 Blast Out Your Stereo "Grunge trio, The Kut have released a brand new music video for their song, “Mario,” which is off their upcoming EP, Make Up.. Trust me, you’ll be singing along to this number for a while (if you aren’t already)." Mistree Magazine “Mario” is 90s alternative rock at it’s very best. It is gritty and heavy, with chugging riffs and thudding percussion." Palace of Rock "There are moments when the all female rock band The Kut sounds like Courtney Love´s Hole… But there are also moments when this London trio bring thoughts to a heavier The Bangles like "Mario", I guess you can call it grunge pop." Backseat Mafia "I went to see them live and they rocked the room with their melodic tracks, long metal hair shaking and rock stances." Bristol Live Magazine “If Deftones and Hole had a little baby they'd probably sound like The Kut” The Kut - Biography The Kut are a basement rock trio born out of the London scene. Having been voted into in the winning spots for MTV UK Brand New Unsigned 2014 Poll, their ‘Make Up’ EP was produced by James LeRock Loughrey (Skindred / White Zombie / My Vitriol / Page & Plant / Def Leppard), featuring 3 brand new tracks plus 2 previous releases ‘DMA’ and ‘Closure’. The first single from the EP, ‘No Trace’ is a dark and emotive track, spending 3 weeks in the Scuzz Most Wanted Rock Chart, alongside bands like Paramore, Green Day - as well as playlisted on their 'All-Stars of Rock Show'. ‘No Trace’ was supported by Alex Baker on Kerrang! Radio and picked up by BBC Introducing in Lancashire and Oxford. This lead to The Kut being invited in for a BBC Introducing live set, where they performed a 4 song set live from the Blackburn studios. The video was play listed on Putpat TV (Germany, Switzerland, Austria) and featured by Vevo, with a number of USA stations also including the track. The current single ‘Mario’ is currently being played on Scuzz TV on the ‘Huge Rock Anthems’ show and has been played on BBC Introducing Lancashire. The previous ‘Closure’ music video was playlisted on Sub TV, Tuune, NME TV (Radar). The music video for ‘DMA’ (aka Doesn’t Matter Anyway) was added to 16 USA cable channels on the Bongo Boy Rock n Roll Show. The band have also had a number of tracks playlisted at the major UK clubs including Club NME and Medication. Previous shows include London 2012 Olympics and the Paralympics, and a sold out UK tour. In 2013 the band performed DJ sets for Kerrang! Klub, London and a string of 14 dates on the Club Criminal tour. The band also have endorsements from Marshall Amplification, Roland / Boss Pedals / TC Electronics / TC Helicon and Dr Martens. @thekutgirlsrock https://www.facebook.com/thekutgirlsrock http://www.thekut.co.uk Forthcoming Dates Sat 23rd Aug: Live Festival, The Blue Room, Blackpool Fri 29th Aug: Worcester Music Festival, Worcester Sat 6th Sep: ALCON, De Montford University, Leicester Sat 12th Sep: Isle of Wight Beer Festival, East Cowes Fri 31st Oct: Halloween Special, The Lincoln Imp, Scunthorpe The ‘Make Up’ EP is out Monday 18th August (Criminal Records) Grunge trio The Kut have released their brand new video for ‘Mario’, a track taken from their forthcoming Make Up EP, slated for release on the 18th August. Featuring a post-apocalyptic narrative, vocalist Maha explains the concept: “The idea of Mario was about frustration, with the industry and the scene. The concept that as kids we were made a lot of promises, but the reality is that all that’s left for us is a waste land. We are the forgotten generation.” Recalling the filming process, she went on to say “We had a lot of fun making it, jumping fences and scaling floors on the outside of broken buildings to get certain shots”. The Make Up EP is available to pre-order now on iTunes, 7 Digital and all good digital retailers. Get signed copies, merch and a download and music video bundle at http://thekut.bandcamp.com