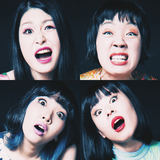 Brooklyn Vegan premiered the track yesterday and Stereogum shared.
"Otoboke Beaver have a truly wild sound that covers everything from bouncy indie pop to raging hardcore punk, and this song falls very much on the latter side. It’s a fun, chaotic, and theatrical song that sounds like a cheerleader chant one minute, and Bad Brains the next. It rips, and you really don’t hear stuff like this everyday." Andrew Sacher (Brooklyn Vegan)

"The track premiered on Brooklyn Vegan today, and makes for quite an interesting juxtaposition of sound and aesthetic. Its velocity and power feel like a major nod to the Northwest riot grrrl ragers of the ’90s such as 7 Year Bitch, or even Sleater-Kinney pre-Janet Weiss, but the cutesy girlishness is undeniably present as well.
Somehow, the craziness of the “anata watashi daita ato yome no meshi” video made their otherwise blatant anger look like pure fun. “Don’t Light My Fire” accomplishes that same atmospheric metamorphosis. It starts out like a school spirit chant that’s underlined with a rising bass line, and without missing a beat or breath, tears right into chaotic hardcore rage. The track ends with eerie whispering chants of “GO TO HELL,” delivering an almost cult-like version of themselves." Keely Quinlan (Stereogum)


Don’t Light My Fire’s Japanese title (‘HEART ni hi o tsuketanaraba chanto keshite kaette’) translates as “If you set my heart on fire, put it out and go home”, deals with the contradictory nature of head vs heart, when you know this is not going to be good for you, yet a part of you desires it. The only way to deal with this of course, is to yell a firm no, or even “GO TO HELL”.

Kyoto’s Otoboke Beaver return with a new album offering! “ITEKOMA HITS” releases April 26th on Damnably Records!
Consisting of 8 newly recorded tracks with new member Kahokiss who officially joined late August in 2018, taking over drumming duties from former drummer Pop.
With 8 tracks recorded at Osaka’s LM Studio by Ippei Suda who also mixed and mastered the album, plus 6 older tracks recorded at Studio Hanamuaii by Kazutaka Miya, and produced by the band. The album is full of the band’s signature turn-on-a-dime, deranged timings and angular punk-rock-pop-garage fury.
With a fresh transfusion from their new member, the band exude even more energy, playing faster and harder than ever, and each members' musicianship has room to shine on Accorinrin’s keen compositional skills.

Otoboke Beaver are a punk-rock-garage quartet from Kyoto, Japan. Formed at Kyoto University’s music club, the band consists of Accorinrin (Lead Vocal & Guitar), Yoyoyoshie (Guitar & Vocals), Hirochan (Bass & Vocals) and Kahokiss (Drums & Vocals).
Acco's off-kilter self taught compositional and confrontational performance skills, together with the band's incredible musicianship make for a thrilling and unmissable live act.
Damnably Records released the compilation 'Okoshiyasu!! Otoboke Beaver' in March 2016, which was championed by Gideon Coe and Tom Ravenscroft on BBC 6Music & John Kennedy on XFM. 2017 was a breakthrough year for the band, with attention from Pitchfork, NPR, i-D and The Fader, acclaimed debuts at SXSW and Fujirock Festival, a sold-out show in London's legendary 100 Club, and their ‘Love Is Short’ 7” charted in the UK for 4 weeks.
In 2018 the band's 'ATTYUUMA' tour saw them travel over 24,000 miles in a week on a UK tour that was bookmarked by slots at Coachella Festival. Recent converts include Tadanobu Asano, Aidan Moffat and The Cribs, the latter describing them as "PUNK AS F*CK".

Recent Press:
Stereogum “a rhythm-twisting, no-nonsense, Japanese girl gang more than worthy of an invitation into the riot grrrl scene”
Pitchfork “Otoboke Beaver demand your undivided attention from the first note, asserting that if they’re going to be heartbroken, it will be on their own terms.”
AV Club “vicious but tuneful punk-rock assaults”
i-D “Their Riot Grrrl attitudes and passion for noise-rock make them stand out as true renegades in the underground scene.”
NPR Music “Otoboke Beaver takes in the history of Japanese punk and runs with scissors in hand towards the bonkers-noise of early Boredoms, Afrirampo’s uninhibited avant-punk, and the revved-up garage-rock of Shonen Knife...Punk is rarely this charmingly vicious.”
The Fader “a wild, raging knockout of a punk track”