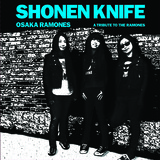 Track Listing: 1. Blitzkrieg Bop 2. Rock ’N’ Roll High School 3. We Want The Airwaves 4. She's The One 5. Rockaway Beach 6. Sheena Is A Punk Rocker 7. Scattergun 8. Psycho Therapy 9. The KKK Took My Baby Away 10. We're A Happy Family 11. Chinese Rock 12. Beat On The Brat 13. Pinhead What is this? Shonen Knife celebrate their 30th Anniversary by paying tribute to their "biggest musical inspirations," The Ramones! The album features 13 Ramones classics, performed by the band as “Osaka Ramones” and released in conjunction with their 30th Anniversary tour. Out in Europe on Damnably Records. What do you need to know about this record? "Osaka Ramones" is not only the name of this tribute album, but is also the name of the side project which has made its way in and out of Shonen Knife's performing history for decades. This East meets West punk rock combination is now captured in an album recorded and mixed between Osaka, JP and New York over the last year and was co‐produced by Robby Takac of the American rock band Goo Goo Dolls. Who are Shonen Knife? “When I finally got to see them live, I was transformed into a hysterical nine‐year‐old girl at a Beatles concert.” Kurt Cobain Osaka, Japan’s Shonen Knife formed in 1981, when Naoko first heard The Ramones. Inspired, the band crafted their own idiosyncratic songs, fashioned brightly coloured outfits and DIY albums. In 1985, K Records released ‘Burning Farm’ in the US. Deals with Sub Pop and various Majors followed. 1989 saw the crème of the alt. rock scene (including Sonic Youth, L7 and Redd Kross) covering their favourite Shonen Knife songs on the tribute album ‘Every Band Has A Shonen Knife Who Loves Them’, toured with Nirvana, The Breeders and as part of Lollapalooza. They recorded sessions for John Peel and appeared on MTV’s ‘Beavis and Butthead’. In 2010 the band played Matt Groening’s curated ATP, and toured the UK, Europe, North America, China & Taiwan. 2011 marks the band’s 30th year since its inception (featuring Naoko's sister Atsuko and their friend, bassist/vocalist Michie) to their current lineup featuring members Ritsuko (b,v) and Emi (dr,v), SK have maintained their rightful place in the ever changing indie rock scene. Naoko, Shonen Knife on “The Ramones”: "Ramones were my all‐time idols since I first heard their music from a radio and rushed to a record shop. This year is the 30th anniversary of Shonen Knife. For celebration, we decided to record a cover album of our favorite band the Ramones. The title is "Osaka Ramones" with our respect. I'm very happy to release an Osaka Ramones project and to recognize their contribution to the evolution of Shonen Knife." Recent Press: Japan Times: “catchy, fun listens that longtime Shonen Knife followers and casual fans will enjoy. Expect a sea of pumping fists and cheers from both groups of supporters.” BBC Music: “The Osaka Ramones, you must concede, still have it.” (6music Album of The Day) Clash Music: “the band's gleeful take on punk‐pop have more heart than their Western counterparts” The Crack: “like a day‐glo version of the Ramones going bonkers on a tube of smarties” The Fly: “Always charming, always exhilarating, ... simply perfect pop.” NME: “The heroic ladies sound just as fresh and enchantingly boisterous as they ever have” Q: “a trimmer female amalgam of the Ramones and Buzzcocks” Rock’n’Rolla: “a whirl of power‐chords and fuzz pedals with a wideeyed optimism.” The Scotsman: “an album in love with the simple, energised thrills of guitar‐based rock’n’roll” The Skinny: “Here’s hoping they erfuse to grow up another 30 years.” Sunday Express: “an absolute breath of fresh air” Uncut: “rocks like Motorhead designed by Hanna‐Barbara” www.shonenknife.net http://www.damnably.com/