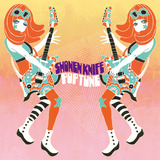 ‘Pop Tune’ is the 18th studio album from Shonen Knife, released in the UK/EUROPE by DAMNABLY on CD/Digital Download. What do you need to know about this record? This new long-player features ten original songs produced by Naoko and manager Atsushi, recorded by Ippei Suda (Afrirampo/Balzac) and mastered by Koichi Hara (Afrirampo/ OOIOO/Boredoms). The UK and European release features special ‘orange’ coloured artwork by up and coming illustrator Mami Saito. What does it sound like? Having explored a 70's heavy metal rock sound in their previous two LP’s Super Group and Free Time, Pop Tune is a return to the bands signature combinations of pin sharp punk-pop, 60’s girl group inspired harmonies, upbeat melodies and irreverence. Pop Tune is a celebration and paean to pop, catchy hooks, key changes, simple, fast, short and altogether jubilant songs. ‘Osaka Rock City’, has been selected as the theme song for the movie adaptation of Robin Shio’s “Soul Train Flower” directed by Hiroshi Nishio and out in cinemas in Japan later this year! This album is also the first recording to feature all members of the band’s current lineup. Lead vocalist and guitarist Naoko as chief songwriter, delivers her characteristic charmingly unaffected view of the world through her carefree lyrics, and with bassist Ritsuko taking lead vocals on “Sunshine”, and drummer Emi taking lead vocals on “Psychadelic Life”, this could well be their first full band masterpiece yet! Who are Shonen Knife? “When I finally got to see them live, I was transformed into a hysterical nine-year-old girl at a Beatles concert.” Kurt Cobain Osaka, Japan’s Shonen Knife formed in 1981, when Naoko first heard The Ramones. Inspired, the band crafted their own idiosyncratic songs, fashioned brightly coloured outfits and DIY albums. In 1985, K Records released ‘Burning Farm’ in the US. Deals with Sub Pop and various Majors followed. 1989 saw the crème of the alt. rock scene (including Sonic Youth, L7 and Redd Kross) covering their favourite Shonen Knife songs on the tribute album ‘Every Band Has A Shonen Knife Who Loves Them’, toured with Nirvana, The Breeders and as part of Lollapalooza. They recorded sessions for John Peel and appeared on MTV’s ‘Beavis and Butthead’. In 2010 the band played Matt Groening’s curated ATP, and toured the UK, Europe, North America, China & Taiwan. SK have maintained their rightful place in the ever changing indie rock scene and 2011 marked the band’s 30th year since its inception. Recent Press Uncut: “rocks like Motorhead designed by Hanna-Barbara” BBC Music: "The Osaka Ramones, you must concede, still have it." The Sunday Times (Stewart Lee) "...irrepressible slice of bounce-along indie-pop. Beguiling." NME: “the heroic ladies sound just as fresh and enchantingly boisterous as they ever have” Voted the winner of BBC 6Music’s ‘Rebel Playlist’ by a landslide vote of 88%, which granted the single a play on every daytime 6Music show for a week plus album of the day on BBC 6Music LondonPaper: (Super Group review)“Part Shangri-La’s, part Ramones, you can’t resist the charm of lyrics ... so give in, and don’t.” Time Out London: “Punchy Pop-Rock” Big Issue “for energy and fun, its no wonder they’re Japan’s prime punk act” 24-7 “Upbeat, quirky and fun: that’s what the band does best.” Artrocker “chock-full of singalong fun times” Sunday Express “an absolute breath of fresh air” The Fly “Always charming, always exhilarating... simply perfect pop.” The Skinny “characteristically bizarre and childishly charming” Scotsman “(Free Time) is an album in love with the simple, energising thrills of guitar-based rock’n’roll” Mojo “an exercise in lustrous pop.” Japan Times: “Shonen Knife are one of the most important bands in history, even if the world at large doesn't know it” Time Out Sydney: “It's a whole lot of fun” BBC 6Music (Steve Lamacq): "Shonen Knife - they know how to rock - Japanese punk pop at its best.” BBC 6Music (Gideon Coe): “the most arresting record I’ve heard this week” Time Out Barcelona: “Super Group continues to polish Shonen Knife’s reputation” Subba-cultcha: “brilliantly bonkers”