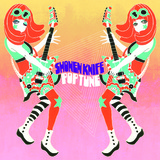 'Pop Tune' is the single from Japanese Legends 'Shonen Knife', taken from their eponomously titled 18th album in their 30 year career. As Naoko says 'Let's Rock!'. “When I finally got to see them live, I was transformed into a hysterical nine-year-old girl at a Beatles concert.” Kurt Cobain “The Osaka Ramones, you must concede, still have it." BBC Music “rocks like Motorhead designed by Hanna-Barbara” Uncut Osaka, Japan’s Shonen Knife formed in 1981, when Naoko first heard The Ramones. Inspired, the band crafted their own idiosyncratic songs, fashioned brightly coloured outfits and DIY albums. In 1985, K Records released ‘Burning Farm’ in the US. Deals with Sub Pop and various Majors followed. 1989 saw the crème of the alt. rock scene (including Sonic Youth, L7 and Redd Kross) covering their favourite Shonen Knife songs on the tribute album ‘Every Band Has A Shonen Knife Who Loves Them’. They toured with Nirvana, The Breeders, and as part of Lollapalooza. They recorded sessions for John Peel and appeared on MTV’s ‘Beavis and Butthead’. In 2010 the band played Matt Groening’s curated ATP, and toured the UK, Europe, North America, China & Taiwan. 2011 marked the band’s 30th year since its inception and saw the release of their 16th original album ‘Free Time’, as well as a Ramones tribute album ‘Osaka Ramones’, which the band are known to sometimes perform as. This year, they release their 18th studio album ‘Pop Tune’, and kick off a European tour with a second live session with Marc Riley on BBC 6music in October. Having explored a 70's heavy metal rock sound in their previous two LP’s ‘Super Group’ and ‘Free Time’, Pop Tune is a return to the bands signature combinations of pin sharp punk-pop, 60’s girl group inspired harmonies, upbeat melodies and all-round, cheer inducing irreverence. After all these years, Shonen Knife have maintained their rightful place as one of the most outstanding, fun and rocking live bands to see in the ever changing indie rock scene. Do not miss this show! RECOMMENDED VIDEO LINK: You Tube – Pop Tune Music video http://youtu.be/ADo6wawOUFo WEBSITE LINKS Official Website here: http://www.shonenknife.net Blog: http://shonenknifeofficial.tumblr.com Facebook: http://www.facebook.com/ShonenKnifeOfficial Other: http://www.damnably.com/shonen-knife