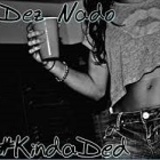 This song came together over time, but in my humble opinion it has a timeless quality. It fuses elements of reggae and hip hop, features live instrumentation, and was inspired by the classic Weekend at Bernie's! The concept is a play on the word Kinda Ded (patois accent), in reference to the character Bernie, and a pun for inebriation, but it also includes a subtle anti-drinking and driving theme, but overall it's a fun, light-hearted song about a night out on the town enjoyed responsibly.

Rapper, Poet, Lyricist, Musician, Artist; all titles collectively constitute an accurate description of “Dez Nado”, an acronym for The D.efinition of E.ffort and Z.eal iN A.mbition and D.edication to O.pportunity.

Born and raised in Jacksonville, Florida, Dez Nado was introduced to rap at very young age. It’s 1998, Hip Hop had just lost its two biggest icons to ever bless a mic, and a young, 6th grade 11-year-old Dez Nado drops his first rhyme on wax with his older brother, his brother’s stereo tape recorder, and his two cousins from the birthplace of hip hop; New York, New York. Dez instantly fell in love with the art of rhyming, and even set out to record his own mixtape (actual “tapes” back then) and distribute it independently at his junior high school. Since then, Dez has honed his skills and become one of the most legit up-and-coming Florida artists in the game by studying his craft and mastering his art with the same independent passion and grind that he’s had since day 1!