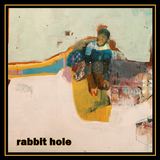 sychedelic-folk-anti-ballad ‘Rabbit Hole’ is the new single by Bastien Keb. It’s the first song to appear from an as-yet-unannounced third album by the multi-hyphenate musician, set to be released by London based label Gearbox Records (Binker & Moses, Dwight Trible, Theon Cross) later this year.

A guitarist first and foremost; Keb also plays trumpet, bass, drums, piano, flute and more - many borrowed, donated or found instruments. Layering his voice to imaginative effect, you may hear influences of Bon Iver or Jai Paul but in truth it’s more indebted to the widescreen soul of The Impressions or The Delfonics.

Bastien Keb's debut album ‘Dinking In The Shadows Of Zizou’ (One-Handed, 2015) subtly nudged itself into public consciousness, drawing the attention of myriad press and radio. Stamp The Wax called it “one of the most sonically interesting releases of the year” and The Wire noted “his trumpet, bass, guitars, drums and flute playing are all outstanding and it’s clear that his understanding of sound separation and arrangement are just as accomplished”. Follow up ‘22.02.85’ (First Word, 2017) solidified his reputation as an individual rising talent, a glowing New To Q feature highlighted his "otherworldly psychedelic soul".

Bastien Keb has been described as "one of the most exciting musicians emanating out of London at present" (Dummy Mag), “a modern yet individual sound that’s an absolute dream” (Wonderland), “3am electro-jazz flickering with warped '70s pop” (The Line Of Best Fit), “blessed with an innate sense of funk and a shrewd songwriting sensibility” (Clash), “brimming with broken hearted lo-fi soul” (Electronic Sound) and "beautifully soulful, avant garde and psychedelic music" (Bonafide). His music has been widely supported on BBC radio by Gideon Coe, Gilles Peterson, Huey Morgan, Huw Stephens, Jamie Cullum, Mary Anne Hobbs, Nemone, Phil Taggart, Tom Ravenscroft, as well as by Amazing Radio and Worldwide FM.