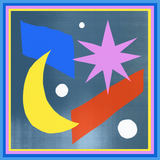 James Alexander Bright's music is as visual a voyage as it is a sonic one; a kaleidoscope of colours that swirl, swoon, soar and sing. Stepping into his musical world is a multi-sensory experience, one where smooth grooves, wonky rhythms, dreamy melodies and immersive atmospheres coalesce to form their own sphere. Following the release of his psychedelic soul debut album ‘Headroom’, new accompanying EP ‘Headroom In The Dark’ is made of tracks recorded during the same period, ranging from the inebriated funk-hop of 'Wild Night' to MPC jazz-jams on 'Slim Jim' and an alternative mountain-top-dub-folk version of 'Dancing With The Birds'.

Based in the Hampshire countryside and an illustrator by day, Bright’s world is often a dual one but one where elements overlap and inform one another. This creative duality extends beyond just the visual. It’s found deep rooted in the music itself, which explores a mix between lo-fi and hi-fi, possessing an intimate bedroom recording-like quality but with a glowing and golden production Similarly, the sunny sheen found in the music - via a kind of psychedelic pop meets electronic soul - is one born from dichotomy. “I feel at home in the deep south of England,” he says. “I’m in the middle of nowhere with lots of green land, fresh air and head space. I feel like the sunshine in the south in the summer months really reflects in my music.”