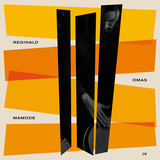 Reginald Omas Mamode IV is set to release his self titled debut album on 14th October 2016 via Five Easy Pieces.

The cult Peckham soul artist caps the release of three highly praised EPs with an album featuring his most confident songwriting to date. The album paints a collage of dusty drum hits, Sly Stone-esque bass lines and Mamode’s own one-take vocals. Themes go from the personal, such as relationship communication breakdown, to the universal, in the anti-war theme of ‘The Value’.

It remains grounded in a love of syncopated drums, played out in the Dilla-esque ‘Talk To Me’, or the free jazz of ‘Omas Sextet’. Elsewhere, on album opener ‘Bruk Out’, the broken beat scene collides with the groove based jazz fusion of Herbie Hancock and the Headhunters, whilst on ‘Drums Of The Positive’, Mamode channels the “slave island music of my father’s heritage… Maloya, Sega, Nyabinghi”.

"Nowadays music seems to be used more as a crutch for humanity.. Most people seem to have forgotten it's a life blood of our species. The natural rhythms of our hearts beating and the melodic instrument 'the voice' gifted to us at birth, are some physical examples of how inherent music is within our being. We all need this thing we call music. Just as all our ancestors did."
- Reginald Omas Mamode IV

This past year has seen Mamode perform live and DJ at the relaunch of London’s Jazz Cafe, Shapes, Ronnie Scott’s, Gottwood festival and dates in France, Netherlands and beyond. Headline UK live dates will follow the album’s release in the autumn.

Along with Mo Kolours, Jeen Bassa, Henry Wu, Al Dobson Jr and Tenderlonious; he’s helped forge in the 22a co-operative that The FADER calls “a kaleidoscopic patchwork of hip-hop, house, and groove investigations bound by one thread: a timeless belief in rhythm as a universal language”.

Part percussive ancestral music, part post-Dilla funk, Mamode’s debut album is a galactic, joyful, and above all funky record. It is a statement of intent from this rising underground star.