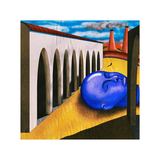 Tyneside alt-rock outfit A Festival, A Parade re-emerge with their sun-soaked new single ’Big Screen TV’, the first of a number of singles scheduled for release in 2020.

Bursting with shimmering guitars, colourful rhythmic drums and infectious melodies, ‘Big Screen TV’ is the first giant leap into unfamiliar territory for A Festival, A Parade, who have been championed by the people of the North for their unique blend of erratic, alternative rock. This is not a step taken without conviction, however, as the track boasts a whimsical, dreamlike quality, culminating in robust, fuzzy duel-guitar riffs, evoking immediate comparisons to American alt-rockers Silversun Pickups, Manchester Orchestra, and AFAP’s namesake The National.

Discussing ‘Big Screen TV’, the band describe the track as “a love story which follows a young couple on their quest to remove the shackles of small-town mentality and social media addiction, and revel solely in the company of one another in an age in which meaningful human interaction feels like a dying art”.

After reaching euphoric heights on the live circuit in 2019, highlights of which include delivering sell-out headline performances at prestigious venues such as Sage Gateshead and House Of Vans London, and an extensive run of support shows with the likes of Suede, Sam Fender and The Cult (stopping off at venues such as Shepherd’s Bush Empire, O2 Ritz Manchester and O2 Academy Newcastle along the way), AFAP resume normal service in 2020, with a breadth of brand new material due for release and an impressive live set in tow.

Produced and mixed by Paul Gregory (Lanterns on the Lake), ‘Big Screen TV’ is released on Friday 8th May 2020, and will be available on all digital platforms.

The band’s name is taken from the lyrics to The National’s ‘All The Wine’.