TUNE Micah Erenberg - Do It For Love 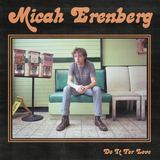 Micah Erenberg is a diversely talented multi-instrumentalist, songwriter and producer from Manitoba, Canada. His lyrics are a mosaic of stories, thoughts and reactions from small town, big ideas Canada; the land of few people and vast, flat, lake laden landscape.

Erenberg's music is charming, witty and authentic. His full disclosure style of writing makes for captivating, poetic and gracefully heartbreaking songs that display an honesty and talent that doesn't take itself too seriously.

Today Erenberg has released new single 'Do It For Love', the latest from his upcoming debut album.

He desribes how the track came to be: "This one’s about the unpredictability of friendships. You never know what kind of people you’ll end up meeting. You never know who people will grow into with time. Sometimes those who you least expect to bond with end up meaning so much to you.

I had a friend when I was a kid who didn’t want to grow up. And as we did he went through a lot of hard times. It wasn’t easy for him, but no matter what he always had a positive outlook on life. He was always able to turn a bad vibe into a good one; a great gift for such a young person. That’s kinda what the first verse is about. To this day he’s still an inspiration to my own growth.

Years later I met this guy at a community house/artspace place in LA. He really didn’t like me too much. Not until I played some TVZ. Turns out we had a lot more in common than we thought. Over the next 3 months we ended up spending some of the greatest times of our lives together. And then I had to move home. We thought we might never see each other again.

Even then its a countdown to when you might meet up again… 4 years later I’m playing a song about him in a bar in Minneapolis, and guess who walks in? That was a pretty special moment. Sometimes you don’t know who or what you’re waiting for and then it all comes pretty clear, pretty fast."

The UK’s opportunity to make friends with Micah starts today as he’ll kick off his extensive run of shows at The Slaughtered Lamb in London on 8th May.