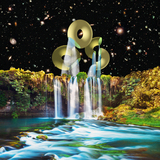 Born out of Wellington's fertile creative music scene in 2009, the Spheres quickly gained a crowd of devotees, entranced by their sonically and visually ecstatic live shows. Their sound is an explosive brew concocted from the primitive, machine-like drumming of Jemi Hemi Mandala, the quicksilver synths of Mos Iocos, the intricate bass lines of EtonalE and the psychedelic biscuit tin guitar work of Baba Rossa. Chanted vocals bring a hypnotic, trance inducing element to many of the tracks, especially in the crowd favourite, Mind Over Might.

Recorded onto 24-track tape at Outside Inside Studio, Montebelluna, Italy, this was the first time the band had recorded in a real studio. Sweaty summer nights, sleep-depriving mosquitoes and abundant fresh local fungi made for a magic combination, and the group banged out all the tunes in one or two takes. The vintage recording gear and mixing talents of Mojo Matt Bordin bring a garage quality to the bands' ancient future funk, and NZ artist Kerry Ann Lee's other-wordly landscapes and magic voodoo scenes adorn the album's cover.

Two weeks after recording, half the band's gear was stolen from the back of their tour van in Poland. Now, somewhere in suburban Krakow, the Spheres' unique homemade instruments, including the sexomouse marimba and electric gamelan, are changing the sound of the Polish underground for the better.

Orchestra of Spheres will tour Europe in November/December 2013. Shows are booked in the UK, France, Germany, Poland, Switzerland, Holland, Denmark, Sweden and Italy. Full details can be found on the band website.