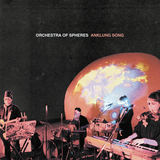 "Part Sun Ra otherworldiness, part Sublime Frequencies and part ESG ... Orchestra of Spheres blew us away. I’ve seen them several times since that first gig and the magic only intensifies each time." Dan Snaith - Caribou

“Orchestra of Spheres must be the most out-of-this-world band in music today...sounds like they come from another planet, where nonstop dance and remarkable melodies are the norm.” Brian Shimkovitz – Awesome Tapes from Africa

It was a few months after the New Zealand general election. A somewhat depressing time. The politicians had been rooting around in shit again. It was bad politics baby, dirty politics. Big, fat Dotcom tried to sabotage the show. It backfired. It was weird, corrupt, boring and sleazy in equal measures. Ultimately the status quo prevailed.

We're not a political band. We want to make beautiful things and give love to people through sound. Our music bounces off the ground and goes up up up up into the air ... But we're living in dark times. It's a time of remote war, mass deceit and money worship. The mainstream is porn on P. Somehow the mood of the time filtered into these recording sessions, in an abstract way. The songs on Brothers and Sisters of the Black Lagoon aren't 'about' anything. We all feed from the same giant soup of images. Sometimes lyrics bob to the surface and we spoon them to our lips.

We had some ideas, some were fully formed, others were just scraps. Tooth was on drums. He'd been lucid dreaming about camels and swimming pools. EtonalE was researching marshmellow factories. Mos Iocos was channeling Luigi Russolo through bamboo tubes. Baba Rossa was trying to get everyone to play out of time.

Riki Gooch, an old mate and pizza chef joined the fold to keep an eye on the recording levels. We borrowed a bunch of gear and set up at our space, the Pyramid Club. It was hot and airless. The guys weightlifting downstairs were sweating and moaning. Willy the ex-con who lived through the wall hammered nails through our door.

We worked through sweltering nights recording these tracks. Most came pretty quickly, in one or two takes. Later we experimented with vocals, tape machines and percussion. One of the musical concepts of the album was to keep space around the sounds. Another concept was bells: we sat in the stairwell in the middle of the night with the Campanology Society's bell set and tolled along to the cars licking their way up Taranaki Street ... slow crescendos and long decays. Bells crept into many of the tracks in different guises: cow bells, sleigh bells, bonang, church bells.

We took the recordings to Mike Gibson at Munki Studios, housed in an ex government spy-base in the middle of town. It was demolished a few weeks later, exposing a secret tunnel that led to the carillon across the road. Mike added his own special touches.

Born out of Wellington’s fertile creative music scene in 2009, the Spheres quickly gained a crowd of devotees, entranced by their sonically and visually ecstatic live shows. Their sound is an explosive brew concocted from the quicksilver synths of Mos Iocos, the intricate bass lines of EtonalE, the psychedelic biscuit tin guitar work of Baba Rossa and the the primitive, powerful stick work of new drummer, Woild Boin.

Orchestra of Spheres will be touring Europe in May/June 2016.