TUNE The Girobabies - Brain Rocket (and the Evolution of Turtles) 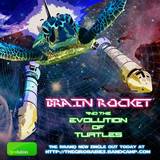 I’ve never been quite sure what to make of the Girobabies, they seem to jump through genres with ease, everything I’ve heard has consistently astounded me, most bands find a sound and stick with it, however that’s not their style… come to think of it I’m not sure they’d settle for one style even if it was adaption.

Their latest single ‘Brain Rocket (and the Evolution of Turtles)’ begins in a relaxing fashion easing you in for the explosion of psychedelia which follows, this in a way sets the theme for the song, there is a constant change of styles throughout its runtime.

You’ve barely registered one section before something has bubbled up from under the surface, at the same time the rhythm section provides the only constant throughout the track, funk, it’s not immediately prevalent but as soon as you hear it, it captures your attention like nothing else.

Girobabies seem to have a talent for weaving together different aspects and genres, it’s a defining feature of the band, yet it never feels forced, it’d be easy to sit with a list of genres and tick through it until you met a certain quota, something which the band continually avoid, however if this is only the single, I’m curious to hear what the whole album will sound like`
Ravechild

`Inspired !
The ever unpredictable Girobabies pull another minor musical miracle from their trick bag with “Brain Rocket (and the Evolution of Turtles)” ripping up everything in sight and sticking it back together with nothing more than skewed inspiration. If only all Scottish bands were this creative`
Bluesbunny

`The latest single from Glasgow / Kilwinning based rockers The Girobabies. Released via Traffic Cone Records ‘Brain Rocket (And The Evolution Of The Turtle)’ is short with sweet melodies and a grunge sound that makes you think that you’re meandering your way through a festival site, or maybe that’s just me. Anyway if you buy the track here you also get two bonus tracks that come with it. If you want to see them live (which we highly recommend) they’re playing at the Barrowlands in Glasgow on the 28th of November for the Clutha Trust Launch Night along with Bombskare, Mickey 9’s and loads more`
Through The Wire Music

t's been a wee while in the making now, but The Girobabies are back to their chaotic best with a blistering new tune...and they have only gone and done it again (as they always seem to do), and given us something that is so bloody catchy (though sadly for my ears, a wee bit shorter than I expected) it makes us want to pass it around the internet like a terrible online STD...but in a good way of course. If that make sense.

This is The Girobabies at the top of their game, a game of course invented, devised, planned and fucking ran by them from the off, and it once again shows us that anything they opt to tear a strip or two off, they make sure they do it in style, and this band are certainly not known for taking prisoners anyway! In that respect this song is no different, and delivers some withering assessments of life's shittier aspects in a style that is all their own!

It's a deep pan, magic mushroom pizza of soaring sounds and dirty grit right from the off, as Mark's vocals snarl to life along to the sweeping, nerve jangling sounds of a Sitar, which i think is a new instrument for the Girobabies to include in one of their tunes, but then again, I could be wrong! What I can say with all honesty is that if this is only a mere taster of what we can expect from a new Girobabies album, then bring that delicious little bastard on as we will be waiting for it with open doors and open minds!

The song itself of course will be released on November 14th (although it's on their page just now as a teaser to the grand launch I think!) and is taken from the forthcoming album which should hopefully drop in Spring 2015. Get over to their page and check it out, get some Girobabies in your life!`
New Hellfire Club

Our latest “Single Of The Week” comes from Glaswegian rockers Girobabies.

Taking in influences from bands like Radiohead and Pink Floyd, the band have built up a strong following over the past few years, and count ex-Beautiful South frontman Paul Heaton as a fan.

The band recently released their latest single “Brain Rocket”, which you can download now from their Bandcamp page`
Salford City Radio