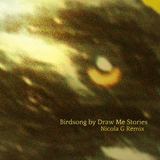 Nicola G remix of the Draw Me Stories song Birdsong.

‘Cocoon Machina’, the debut album by DRAW ME STORIES, is expansive, intensely rhythmic and refreshingly eccentric. Set for release on Glasstone Records, the album is the band’s first time working with producer Charlie Francis (REM, Turin Brakes, Future of the Left). In particular, Francis was drawn to the band's unique sound. "From the first time I met Draw Me Stories I thought they were impossible to categories - or what we used to call originality", states Francis.

DRAW ME STORIES had shifted dramatically since their earlier, folk-tinged releases. ‘Cocoon Machina’, is an adventurous leap forward with infectious tribal rhythms, abstract lyricism, vivacious guitar arpeggios and pulsating bass sections, and for the first time using synthesizers, percussion and samples overlaid sparingly to provide a sense of space in what is a largely minimalist record; most realized on epic songs, ‘Birdsong’ and ‘Blood Follows Grain’ & ‘Grain Follows Blood’. At times, the album hints at gothic pop, where ominous synth lines, sweeping arpeggios and distorted vocals crawl over intelligent drum and bass interaction. DRAW ME STORIES have created something that is coherently their own.