Back to GUTTFULL's Music <
EP 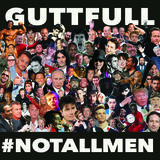 Brand new sax punk band GUTTFULL are launching their debut EP, #notallmen, on 20 July 2017, with a launch gig at The Lexington, Islington. The 6-track EP is self-released by the fiercely DIY band, providing an immediate introduction to a band creating a big noise in the underground music scene. A tour of the UK is planned this summer (dates below). The songs are unapologetically angry, feminist, working-class anthems, with a healthy dose of wry humour and self-effacing charm. And seriously catchy hooks. The EP’s lead song, #notallmen, is a tongue-firmly-in-cheek ballad for those many men who love to think of themselves as feminist allies, yet prove themselves to be anything but. A riotous video for the song is in the works and will be released to coincide with the EP launch. The track artwork is already causing a stir: depicting the faces of nearly 100 famous and not-so-famous men who are “part of the problem”, including John Peel, Dapper Laughs, Vladmir Putin, matey off of out of Cabbage, Itch from the King Blues, The Duke of Edinburgh, and Harry Styles. How many more rotters can you spot? The EP includes their debut single, Arsehole, which was released 20 Jan 2017 as a message to Donald Trump on his inauguration day. The stunning video for the track was premiered on Louderthanwar – view it here https://youtu.be/oZ5qBtdQ06M Another single from the EP, Keyboard Warrior, released 18 May, has been widely praised for turning the tables on the sexist internet trolls that hound female musicians. The track was included on the LOUD WOMEN Volume One compilation album. The video premiered on God Is In The TV, and featured genuine abusive internet comments crowdsourced from the band’s musician friends: https://youtu.be/SioJ66bXEMo The other tracks on the EP are: • Does Your Girlfriend Know You’re Here? – the true story of a boyfriend cheating in every way possible • Mafu – a Samoan word meaning ‘rotten, fettid’, and used here to denounce manufacturers of the patriarchy and general enemies of the people, ranging from bus manspreaders to Donald fucking Trump • Tits and Nails – a song calling out the cat-callers About GUTTFULL A female-fronted sax punk band from Esher, Surrey, they say, “GUTTFULL is an expression of fury at injustice and oppression. Racism, sexism, class war, and bad fucking manners: we've had enough of this shit.” A very new band (first gig played in December 2016), GUTTFULL are already causing a ruckus, getting played all over the radio, and gigging like crazy. Expect lots more of this sort of thing. The band is: • Moe Tasker – vocals • Cassie Fox (Thee Faction, ex-The Wimmins' Institute, and founder of LOUD WOMEN) – guitar • Gemma Gompertz – bass • Phil Whaite (Thee Faction, Keith Top of the Pops) – sax • Louis Richardson (ex-Joana and the Wolf) - drums Praise for GUTTFULL "GUTTFULL’s set list rings true of old, reminding us that we still need to shout about misconceptions. The titles belie the melodies and groove of the band, for whom reference points from the herstory of exciting music come thick and fast, such as X Ray Spex and The Slits (minus the dub and reggae). At points, vocalist Moe sounds like Kathleen Hanna." – Ngaire Ruth, The F-Word "GUTTFULL's expletive-ridden feminism has the tunes to carry it off.” – Bob Oram, The Morning Star “X-Ray Spex for the Trump years” – The Journalist, the magazine of the NUJ “GUTTFULL have the greatest post-millennial pop star on vocals” – Billy Reeves, BBC London "energetic numbers reminiscent of Bikini Kill if they had a baby with the Undertones, and adopted a saxophone player" – Parallel Magazine GUTTFULL was included in ‘Ten bands reinventing riot grrrl’ in teamrock.com here “Bands like GUTTFULL remind me how, in times of utter dismay, protest songs hold great power. They inspire people to march, shout and sing their way through the shit times. They are just what we need." - Gigslutz "A spiky sax-laden feminist punk song with a side order of rrriot grrrl, it rattles along delightfully flipping vs at twattish sexist trolls. It shares a punk angularity and attitude with The Slits and harks back to the kickass brass punk of X-Ray Spex." – Bill Cummings, GodisintheTV “In a sea of man-rockers, such a touch of class. Songs are artful, clever, soulful, interesting, supremely punk.” – Pearl Pelfrey, Queen of Riot Grrrl Soundcloud - https://soundcloud.com/guttfull Bandcamp to buy EP - https://guttfull.bandcamp.com Facebook page - https://www.facebook.com/guttfull/ Twitter - https://twitter.com/guttfull Live dates currently confirmed 14 July – Birmingham – The Flapper 20 July – London official launch – The Lexington 24 August – Southend – The Railway Tavern 2 Sept – London – LOUD WOMEN Fest