Back to Ian Roland & The Subtown Set's Music <
Album 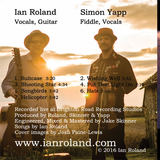