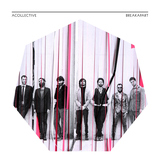 The third single from Acollective’s mesmeric second album, Pangaea, Breakapart is a reminder of what has been an incredible 2014 for them, and a taster of what’s to come… Locked for a UK tour next May, alongside a run of shows in Germany in February and the little matter of a homecoming show in front of 2,500 fans in Tel Aviv – this is a band to get excited about!
Formed in 2008, ACOLLECTIVE is a 7-piece band and social movement, fronted by Roy Rieck and Idan Rabinovici. The band's early shows became a weekly cult gathering in Tel-Aviv, and they were soon playing sold-out shows - establishing a loyal fan-base and gaining critical acclaim and extensive airplay in Israel – all this without any support or plan of any sort. Since 2009 they have toured all over Europe (playing the likes of Glastonbury, United Islands, Y NOT? Truck, Pentaport (Korea) and supporting Jose Gonzalez and Okkervil River), quickly earning a local following and a reputation for show-stopping concerts, wherever they are.
After a positive reception to Acollective's debut album - ONWARDS, produced by Chris Shaw (Bob Dylan, Super Furry Animals, Guillemots) - Acollective’s new album has set them on the road to something truly spectacular. Recorded after months of work in a make-shift factory-turned-rehearsal-wonderland (which was then “transported” to the studio so that the band could record the album in live takes) it led them to press adoration across Europe, saw a string of sold out shows and festivals in Israel, Germany, UK, Korea and across Europe

In spite of all of the album’s intricacies, a priority for the band was to maintain the essence of their environment so everything was recorded live. The mere mention of influences is enough to spark bloody violence within the band. Ask them who they listen to and they’ll tell you Sufjan Stevens, Beck, Paul Simon and Radiohead. Delve a little deeper and you’ll learn about their love of everything from Dixie Jazz, Japanese Pop and old-school hip-hop to modern-Arab-kitsch. What’s for sure is it works, and this is a collection of songs the likes of which have not been heard before.

As the band’s leader, Idan Rabinovici cryptically offers; “You must keep dancing even if the ground around you is shaking, safe in the belief that things must break apart and shatter in order to reconnect again.”