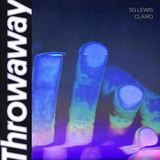 Today, PMR-signed producer, songwriter and multi-instrumentalist SG Lewis releases his brand new collaborative single with Clairo ‘Throwaway’ via PMR/Virgin. The track follows ‘Blue’ as the second to come from ‘Dawn’, the third and final instalment of his hugely ambitious three-part concept album ‘Dusk, Dark, Dawn’, out later this year.

‘Throwaway’ is the second collaborative track between SG and rising viral US star Clairo, after last summer’s breakthrough track ‘Better’. Clairo’s honeyed vocals on ‘Throwaway’ are perfectly framed by SG’s intimate, downtempo production; “Clairo is one of my favourite artists to work with, and a good friend of mine” says SG: “Throwaway was written in LA one evening -we were both super tired and had some shit going on in our respective personal lives. We sat and talked for ages, and after that Throwaway flowed out in no time at all. Clairo is such a special artist and an incredible songwriter, and I'm super proud of this song.”

‘Dusk, Dark, Dawn’ chronicles the trajectory of a night out through its different moods and genres and serves as a tribute to club and youth culture. While Dusk (released earlier in 2018) blended disco, smooth electro and funk and Dark explored distinctly heavier yet still diverse sounds, Dawn is a sonic embodiment of those euphoric sunrise moments and the feeling of togetherness at the end of a night well spent.

It’s been an incredible six months for SG Lewis that has seen the artist sell-out venues across the US, Asia and Europe (as well as a very special sold-out homecoming show at London’s Printworks in December). Dark lead single ‘Hurting’ has continued to grow, hitting No.1 on the Billboard Dance/Mix Show Airplay Chart two weeks ago, and with SG set to play a prime slot at this year’s Coachella, he continues to cement his status as not just one of London’s hottest new talents but also a formidable artist capable of making a splash on both sides of the Atlantic.

SG has previously collaborated with Col3trane, Raye, Ray BLK, The Neptunes/N.E.R.D’s Chad Hugo, Gerd Janson, Conducta and more as well as producing Dave’s ‘100M’s’ proving his worth as one of the most respected and prolific musicians from the UK and a producer capable of working outside of genre and style.