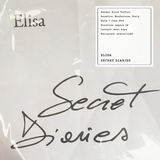 Multi-platinum international singer-songwriter Elisa reveals a brand-new exclusive 5-track EP, ‘Secret Diaries’, available today on all streaming platforms, via Island Records. Born from an urgency and desire to continue a direct relationship with her fans, the new body of work follow up on last year’s international single ‘Will We Be Strangers’, and comes ahead of her upcoming UK and European tour, which will see the talented artist headline venues including the Union Chapel in London on 30th July and The Liquid Room for Edinburgh Festival Fringe on Friday 2nd August. Subtle, minimal instrumentation provides the backdrop for Elisa’s personal, raw and honest lyrics and warm vocals on lead single ‘Feeling This Way’. The delicately-plucked guitar work enhances Elisa’s powerful and descriptive storytelling, resulting in a timeless and beguiling acoustic number. There is a thread of exposure and inescapable vulnerability that runs through all the songs, “are self-produced, very DIY songs, stripped-back from the usual full studio production”, explains Elisa, “I wanted the listeners to hear them in the same way I listen to them in my headphones when they are still demos.” The raw production echoes her lyrical content. Her vocals recorded up close for added intimacy, “encapsulate the vulnerability and honesty that came out while writing those songs”, explained Elisa, “they are about intimacy, feminism, and the idea of America as an island that doesn’t exist”, she reflects. With ‘Secret Diaries’ Elisa will launch a new way of releasing her music, through a personal "in progress" Spotify Playlist, on which she will upload unpublished tracks and demos, not necessarily linked to official releases. UPCOMING LIVE DATES July Sat, 20 Germany, Cologne, Luxor https://www.fkpscorpio.com/de/veranstaltungen/ticketshop/?sprache=0&standort=TIX&veranst_nr=12559 Sun, 21 Germany, Hannover, Musikzentrum https://www.fkpscorpio.com/de/veranstaltungen/ticketshop/?sprache=0&standort=TIX&veranst_nr=12560 Tue, 23 Norway, Oslo, BLAA http://www.blaaoslo.no Thu, 25 Germany, Hamburg, Fabrik https://www.fkpscorpio.com/de/veranstaltungen/ticketshop/?sprache=0&standort=TIX&veranst_nr=12561 Fri, 26 Switzerland, Bellinzona, Castle On Air Festival https://www.ticketcorner.ch/tickets.html?affiliate=TCS&doc=artistPages/tickets&fun=artist&action=tickets&erid=2358335&includeOnlybookable=false&xtmc=elisa&xtnp=1&xtcr=1 Tue, 30 UK, London, Union Chapel https://www.unionchapel.org.uk/event/30-07-2019-elisa/ August Fri, 2 UK, Edinburgh, The Liquid Room (Edinburgh Fringe Festival) https://www.432presents.com/events/9929a24d-4521-4906-966c-d6b2be344a71 NOTES FOR EDITORS Audiences have recently proven that language and nationality shouldn’t be a barrier when it comes to music, and Elisa has certainly redefined how Italian artists cross over to the international music scene. Accomplishing the unthinkable in the Italian music industry: a raw and credible artist, writing and singing entirely English and reaching the top of the album charts, as well as crossing over into the international music scene market - with albums released in several European countries, USA and Canada, SA and New Zealand - she is comfortable in both worlds. Armed with a career spanning over twenty years, Elisa has collaborated with some of the most important international artists in the world; from Bjork’s early producer and trip-hop creator Howie B, Katy Perry, No Doubt and Alanis Morissette’s producer Glen Ballard, as well as writing and recording #1 single ‘Teach Me Again’, released with the Grammy Award-winning rock singer Tina Turner for the anthology film ‘All the Invisible Children’. Whilst Anohni formerly known as Antony Hegarty featured on ‘Forgiveness’, a single included in her #1 album ‘Heart’, which peaked at #34 on the Global Album Charts. Her collaboration with Ennio Morricone - featured on Quentin Tarantino's Oscar-winning movie ‘Django Unchained’ and its soundtrack album – ended up being pre-nominated for an Academy Award as Best Original Song. Her most recent duet with British songwriter Jack Savoretti, was the crowning of a long friendship, started when the acclaimed bluesy singer opened Elisa’s past Arena tours in Italy. Her song ‘Dancing’ topped the iTunes charts both in USA and Canada and ranked 25th in the Billboard Hot Singles Recurrent for the Year, with her 2008’s album ‘Dancing’ climbing to number 5 on Billboard's poll for Best Album of 2008, prompting Decca Records to release a special anthology album ‘Steppin’ On Water’, in USA and Canada. During her career she has won numerous prestigious music awards both in Italy and internationally, her beguiling performance at Sanremo Festival won her the first prize, from there she went to win several MTV European Music Awards, she sung at the Winter Olympics Games closing ceremony in Salt Lake in the USA, as well as becoming an ambassador for Save the Children. Her most recent accolades include giving her voice to the Italian version of ‘Baby Mine’ for Tim Burton's ‘Dumbo’ and gracing the cover of Vanity Fair Italy.