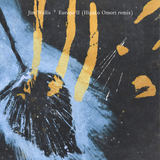 Post-classical musician Jim Wallis has announced the forthcoming release of ‘Europa Reworked’, for which he has teamed up with acclaimed artists including Erland Cooper, Vanishing Twin, Max Cooper, Hinako Omori, Sofie Birch, William Doyle (East India Youth) and more. Out 20th November via Tip Top Recordings, the record comes off the back of Wallis’ well-received debut album ‘Europa’.

A newcomer to the post-classical and ambient worlds, yet fully formed as he arrives, Jim Wallis is no stranger to embracing musical crossover. A drummer in critically lauded indie bands Modern Nature (members of Ultimate Painting / Beak>) and Still Corners, as well as a session musician for Bryde and Psychic Markets (Bella Union), Wallis is also a superb ambient artist in his own right. The album, which came out at the start of 2020, accompanies forthcoming independent movie ‘Europa’. ‘Europa "Based on a True Story" documents the story of an asylum seeker who takes his own life.

Talking about the reworked album, Wallis said: “Ben from Tip Top Recordings first floated the idea of a remix album back in March while I was in the middle of a 2-day drive back from Barcelona with Modern Nature, where we'd played on the last night before lockdown there and before the rest of our tour was cancelled. It was a ray of positivity on the long, eerie drive home and it was a great distraction in the first weeks of lockdown to draw up a wishlist of artists to approach.

I'm over the moon with the list of people we managed to get involved in the project. From people whose work I've admired for a while from afar like Erland Cooper and Sofie Birch, to my old friend Cathy Lucas from Vanishing Twin who played violin on the original album, and Izzy Johnson who I met in Detroit on tour, it feels like a varied and interesting mix of different styles and approaches and has resulted in a set of interpretations I would never have imagined myself.”

Transforming floating, ethereal guitar track ‘Europa I’ into a dark and foreboding reworking, Max Cooper’s perspective on the track places it in a different world altogether. Talking about his collaborative efforts with Wallis, Max Cooper said: "This Jim Wallis album is something special. The feeling and atmosphere grabbed me immediately and set a challenge of how to remix something without destroying the effect. With that in mind I stuck with the drumless format and spent a lot of time in free expression mode, playing with synths and distortion pedal combos accompanied by Jim's strings and texture which I had re-arranged into a longer format to give time for my electronics to grow. That was the key idea in the end, just to let the feelings grow naturally around what was there, into what turned out a full body consumption. I recommend listening with a good sub-bass response if you can, there's some sub frequency interaction later on which creates an unusual torso massage. Or if you ever come to see me play sometime in future when things get going again, ask me to play it for you and I'll show you what I mean. Big thanks to Jim and Tip Top for letting me have a play with this beautiful music."

Elsewhere, Erland Cooper has created a haunting cello led remix from track ‘Open Door’. Wallis said: “During the making of Europa, I learned to play the cello, using the instrument that my late grandmother played for 80 years. As I was still a beginner, I tended to push the cello parts to the back of the mix or cover them up with reverb, but Erland has put the cello line from this track front and centre...and to my relief it sits well at the centre of the beautiful backdrop he’s created.”

London based musician Hinako Omori plays live with the likes of Ed O’Brien (Radiohead), Kate Tempest, KT Tunstall, Alt-J and Georgia, yet her hypnotic remix is of another world. She explains; “I became so fixated on the beautiful string outro of ‘Europa II’ that I decided to base the remix around this sequence of chords. The idea was to start with the strings playing serenely and quietly, looping this and building and building until it gradually descends into a whirlwind of mad chaos.”