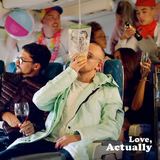 A fresh take on a classic hip-hop sound, ‘Love, Actually’ pairs Frankie’s introspective lyrics and downbeat vocals with sparse, fluttering production. It’s one of 15 tracks on Breathing Exercises, the pair’s debut album with the likes of Loyle Carner, Manga St. Hilare and Isaac Waddington all featuring across the LP.

In the months leading up to this album, Frankie & Harvey have been showered with praise across radio, seeing support from BBC Radio 1’s Annie Mac who picked the duo as her ‘New Names’, and 1Xtra’s DJ Target who has shown support for the guys from their garage-inspired track ‘Coconuts’. There has been additional support from Radio 1’s Huw Stephens, Adele Roberts and Phil Taggart, 1Xtra’s DJ Charlsey, as well as BBC 6 Music, Rinse FM, Beats 1 and Reprezent FM.

Having secured coveted support slots for Slum Village and Loyle Carner in recent years, the pair went on to complete two sold out UK tours in 2019, which included stand-out performances at two of London’s most popular venues, Heaven and Village Underground. Following this, the guys have just announced a 10-date UK tour that kicks off this May, hitting up major cities including Birmingham, Manchester, Leeds, Edinburgh, Dublin and London. They will round off the dates with a special homecoming performance at Brighton’s The Great Escape.

Influenced by multiple genres including classic hip-hop, modern urban, UK garage and dance music, the Brighton natives cite Kano, MJ Cole, The Streets and OutKast amongst their musical inspirations. Honing their signature sound since their teenage years, they have built a cult following through a strong catalogue of album releases.

A fine example of modern UK hip-hop, ‘Love, Actually’ is the perfect indication of what to expect from Frankie Stew & Harvey Gunn’s exceptional LP Breathing Exercises.