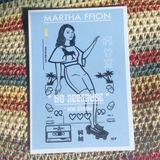 In the first in a series of brand new PostMap collectable postcard singles, it gives Lost Map Records great pleasure to introduce Martha Ffion, with her double-shot of infectious surf-grunge guitars and ethereal girl-group vocals ‘No Applause’ / ‘Lead Balloon’. Recorded and produced by Tuff Love’s Suse Bear, who also plays bass on the tracks, and featuring The Phantom Band’s Ian Stewart on drums and Poor Things’ Craig Angus on lead guitar, the single marks a major step forward for the Glasgow-based Irish singer-songwriter, AKA Claire Martha Ffion McKay, who has been making a head-turning name for herself on the local scene, sharing stages with the likes of Jessica Pratt and C Duncan.

‘No Applause’ / ‘Lead Balloon’ follows on from the success of Martha’s 2014 debut EP ‘Go’, and marks a major development in her sound. Performing with a full band for the past year has transformed Martha’s songwriting process, and the new material has adopted a punchier edge with echoes of Sharon Van Etten, Angel Olsen and Courtney Barnett. But her core influences remain consistent and tangible: 60s icons like The Beatles, the Shangri-Las and Nancy Sinatra. There’s a hint of Blondie too, especially in the wry delivery of ‘Lead Balloon’s’ vocals, and a lyric which, with the deceptive bounciness of The Go-Gos, deals bluntly with familial breakdown and oppressive gender roles. The tracks are a taster for Martha’s forthcoming second EP, which will be recorded this summer at Glasgow’s Green Door Studios as part of their Super Groups project.

Martha Ffion’s new single comes as part of a collectable set of three PostMap releases (snail-mailed printed postcards stamped with a message from the artist and a unique download code), which will also include the Lost Map Sampler #2 (PostMap 01°01) and Randolph’s Leap’s ‘Isle Of Love’ EP (PostMap 01°02). The postcards will be priced £1 each, or can be bought as a set of 3 for £2. They will be made available exclusively from lostmap.com on May 26, 2015.