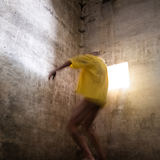 Oxford, UK electronic/indie outfit Low Island share their track ‘Don’t Let The Light In’, out on their own label Emotional Interference and featured on FIFA’s 2021 soundtrack. It will receive its first play on Lauren Laverne’s ‘While You Were Sleeping’ feature on her BBC 6music show.

Fusing emotive synths and skittering guitars, ‘Don’t Let The Light In’ evokes the reflective lyricism of Arthur Russell alongside the off-kilter electronics of Tame Impala, Little Dragon and Caribou.

Fusing emotive synths, skittering guitars and propulsive electronics, the first version of the song was written 3 years ago: ‘It’s a song about trying to preserve the moment of falling in love, but ultimately being unable to’, explains singer Carlos Posada. ‘I fell quite deeply in love with someone who didn’t love me back, and it set off a pattern that continually repeated itself; a flying start and then an abrupt ending, as if someone had just switched off a light with no explanation. This song is about trying and failing to capture that initial moment in time; of pressing pause and holding the frame before it falls apart’.

It was mixed by Matt Wiggins (Holy Fuck, Porridge Radio, The Fat White Family) and is accompanied by artwork made in collaboration with cinematographer Ann Evelin Lawford (100 Vaginas, Ghostpoet, The Japanese House, Sam Fender).

Described by DIY magazine as offering the ‘the middle ground between In Rainbows electronic wizardry and the life-affirming bangers of Caribou’, Low Island is made up of singer and multi-instrumentalist Carlos Posada, producer Jamie Jay, bass player Jacob Lively and jazz drummer Felix Higginbottom. It is a sound that has won them plaudits from NME, Wonderland, The Independent, The Times, The Line of Best Fit and more. Their last EP featured in 6music’s Lauren Laverne and Tom Robinson’s highlights of 2019, and was accompanied by a critically acclaimed UK tour in collaboration with Arts Council England.