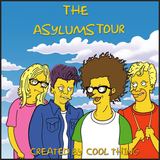 Artist : ASYLUMS Single : Sunday Commuters Label : Cool Thing Records Impact Date : October 21st 2016 Next Live : Bestival - Sept 8th + Huge UK headline KILLER BRAIN WAVES tour. ASYLUMS announce new single ‘SUNDAY COMMUTERS’ taken from their critically acclaimed debut album KILLER BRAIN WAVES + Sept/Oct tour dates BBC 6 Music ALBUM OF THE DAY - August 2nd 2016 "Accomplished, fresh and exhilarating" 9/10 - Louder Than War Magazine "Anti-boredom Anthems for the "information genocide age" 10/10 The Zine Sept - 8th - Bestval, Isle Of Wight 16th - London, Forum October 16th - London, Hackney Wonderland 21st - Southend, Chinnerys 22nd - Salford, Eagle Inn 23rd - Oxford, The Cellar 25th - Bristol, Exchange 26th - Brighton, The Hope & Ruin 27th - Leicester, The Cookie 28th - Digbeth, The Rainbow 29th - Aldershot, West End Centre ASYLUMS - SUNDAY COMMUTERS The day job. Like clockwork. Monday to Friday, 9 to 5. Two weeks off in Summer. Pub on Saturday nights. Ah, Sundays. Lie in. Sunday papers, roast dinner, blah blah blah. No? Not for a band like Asylums. Sure, they’ve all still got the 9 to 5 as they’re all partial to eating and having somewhere to live. But they make the music happen outside of that. Evenings, weekends, bank holidays… Touring? A superhuman effort, but they make it work. No Vampiric sleep schedule for them. Southend to Watford is quite a commute to make an album. Up at 6AM on a Sunday to make a 9AM recordings session, drifting through the deserted financial district like the only people alive, feeling like you’re in a zombie movie. These experiences inspired new single “Sunday Commuters”, and it’s themes of swimming against the current. With some of the coolest harmonies from the “Killer Brain Waves” album (thanks to drummer Henry), a 1960s vibe underpins this song of alienation and the human condition in twenty-first century Britain, all the while juxtaposed with the killer hook that gives the nod towards early Blur and Smashing Pumpkins. It all started with a killer brainwave in a spare bedroom in Southend-on-Sea. Over the last two years the killer brainwave turned into killer pop hooks and killer lyrics, which turned into killer singles, and now a killer album. And some killer videos, too. With the harsh climate of Austerity Britain kicking the non-wealthy in the nether regions, necessity dictated that the band take the do-it-your-bloody-self approach right from the off, and Asylums have proved that you don’t need a huge budget, just really really good songs and a bit of creativity. Which is just as well, as A) they’ve never had any sort of budget and B) they write really really good songs and are a bit creative. “Killer Brain Waves” really is a killer album. The huge critical acclaim for this debut record is made even more special, as many of the reviews praise the social relevancy of the songs within – post-millennial anxiety? Asylums are going to shout about it. And there’s been no slacking off on a Summer Holiday – Asylums have foregone the beaches and donkey rides, and kept on grafting. Following a sold-out album launch for Radio X at London’s Lexington, came prestigious slots for the band at Reading & Leeds Festival and Bestival; even during the album launch week they put the champers on hold and headed for the studio to record some new music… Will we see the fruits of their studio labours soon? We’ll have to wait and see… So what else is next? Plenty. That’s what. A headline tour in October with support from Blackwaters (a band for whom Luke from Asylums has been writing and producing tracks alongside Carl Barat); + more And 2016 is by no means done and dusted - Asylums still have some surprises up their sleeves for this year... ASYLUMS ONLINE Website www.asylumsband.com | Twitter www.twitter.com/asylumsband Facebook www.facebook.com/asylumsuk RADIO : RHYS @ MARTIAN PR - promo@martianpr.com /