TUNE ASYLUMS - I've Seen Your Face In A Music Magazine 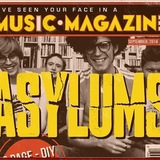 NME Radar – ‘Like being caught between a hammer and an anvil’

So the television’s dead now. What’s next?

Their faces. You know the ones. The plastic popstars, there for the fame, the money, the sex, the drugs, everything but the rock ‘n’ roll. You can do it better. We can do it better. They may have the cheekbones and the chequebook on their sides, but we’ve got the tunes. Asylums have got the tunes. Try finding them on Facebook or Twitter – good luck with that. But you will find them on Radio 1. You will find them in a music magazine. For the right reasons.

Making good on the promise of “The Death Of Television” (www.thedeathoftelevision.com), their first warning shot across the bows, Asylums reveal a little more of their pop chops amongst the fast, quirky “I’ve Seen Your Face In A Music Magazine.” Resolutely sticking to their do-it-yourself ethic, the video was filmed, directed, and edited in the frontman’s bedroom by the band themselves, on the hottest day that 2014’s Summer had to offer.

The glove(puppet)s are off. Get switched on, and don’t change the channel.

Stream ‘I’ve Seen Your Face In A Music Magazine’ >> yourfaceinamusicmagazine.com

Subba Cultcha / New Artist Of The Day
Loud, quick and brash with thumping guitars and in your face vocals

Whats The Ruckus
An acute blend of britpop, punk and noise rock … packs an incredible punch and I just want to hear more