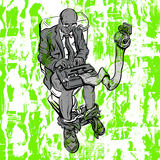 
"If you took all of rock'n'roll culture, music, music papers, posters, comics, cans of beer and put them in a very large microwave oven then that's the first album by Asylums"
Steve Lamacq

"Imagine that members of The Bends-era Radiohead, Spiritualized and Nirvana had got together to write fuzzed-out, anthemic grunge-pop" Louder Sound 20 Artists for 2020

“A tenacious assembly of fuzzed up guitar tunes that dismantle feelings of political perplexity and emotional overload; Asylums’ third album Genetic Cabaret is the product of intense personal and social scrutiny.” 8.5 / 10
The Line Of Best Fit


Ramping up to the July 17th release of their INCREDIBLE new album ‘Genetic Cabaret’, Southend rockers Asylums have released yet another BANGER, with new single “Who Writes Tomorrow’s Headlines?”

" ‘Who Writes Tomorrow's Headlines?’ is about the puppet masters, those ominous figures that are pulling the strings and manipulating our narrative in the surveillance capitalism age", says frontman Luke Branch.

Making a music video under the current Covid-19 pandemic of course proved a little problematic and the mission fell to director Andrew Delaney.
th

“The video started out as an answer to the question posed by the songs title.” he said. “We believe that events drive headlines, no matter how much they may be misreported. So we started thinking about the impact of people power, the history of direct action from the Suffragettes to the Vietnam War protests, from CND to Black Lives Matter. Agit pop and openly political art became key to our aesthetic, Barbara Kruger and the See Red Women’s Workshop via Andy Warhol and Gilbert & George.

All of this was ace but because of the lockdown filming the band was problematic. So we built our own outdoor studio, hung big white backdrops between trees and filmed the band in front of them. Finally we used some of the lyrics as slogans where they felt pertinent or poetic. Popular movements and people power can change the world for the better - they’re the only things that ever have.”


Check Out The Video For “Who Writes Tomorrow’s Headlines?” Here:


On July 17th, in the midst of a global pandemic, Asylums will release their latest masterpiece ‘Genetic Cabaret’ through the bands own label, Cool Thing Records. Their genius follow up to 2018’s acclaimed ‘Alien Human Emotions’ was recorded in the privacy of a world-class studio with legendary recording engineer and sound alchemist Steve Albini (In Utero by Nirvana, Rid Of Me by PJ Harvey, Surfa Rosa by Pixies; too many stone-cold legends to parenthesize).

Whilst recording, the band split their time between Chicago, whose big honest soul superseded the garish horrifying pantomime of Trump’s America, Norway and Germany, where Brexit shame was temporarily suppressed like a bad nightmare. The 4 piece, now isolated back on the floundering isle of chaos that is home, nails bloody from picking the real from the farce and bursting at the guts with tales of runaway adventures, magpie wisdom, and furious hope. Asylums have big new things to say - pandemic or no pandemic.

Originally described as “Blur if they were raised in Seattle or signed to Sub-Pop" or “the excitement you felt when you first heard Buzzcocks or Manics”, the development of Asylums has taken them into a brand new sonic space – a combination of anger and experimentalism, of whispered secrets and musical mood swings. For those that need a “for fans of...” reference - think Fontaines DC and METZ gene-spliced with The Flaming Lips and Spiritualised.

Moving on from the neon ride of the first album ‘Killer Brain Waves’ and the bold exploration that was ‘Alien Human Emotions’, ‘Genetic Cabaret’ is a seething tandem of beauty and ire. To theme it is to expect a riot to keep within the lines but look forward to political puzzling from protesting hearts, a pop-punk pop at the establishment, a demand for something else. This is a band of brothers who have realised they are not boys anymore. Gone are the days of kicking stones about their seaside town. Asylums have learned how to articulate their hearts and weaponise their conscience. The prelude to parenthood (vocalist/guitarist Luke Branch recently became a father for the first time) brings a new vital urgency to their work. These are the times to demand more, not just for yourself, but for the future.

“Genetic Cabaret was written during the most turbulent time I've ever experienced socially and politically in the UK,” says Luke Branch. “I'd stay up late every night binge-watching the news and political punditry and write songs all day. During writing and rehearsals, my wife fell pregnant and the huge emotional impact of that got me thinking about the world I was bringing our child into from a new perspective. I examined political history, human biology, generational divides and emerging technology in equal measure. The resulting album feels leaner musically, harder-edged and with anger and empathy in equal measure"

It’s been a huge 18 months for Asylums. As recent recipients of the prestigious and hard-to-score PRS Momentum Fund, their next leap forward seems gilded, greased, and good-to-go. Current singles ‘Catalogue Kids’ and ‘A Perfect Life In A Perfect World’ finding warm homes at BBC 6 Music, Radio X and Kerrang! Radio, as well as playlist adds at Deezer and Spotify and nods from The Independent, Kerrang! NME and Louder Sound have only increased expectations and excitement for album number 3.

Asylums story is the blueprint not only to a DIY existence in music for 2020 but to an understanding that what others perceive to be weaknesses (mental health challenges, making guitar music in a climate of pop, the low financial return of recording and touring in the streaming era) are actually the strengths that keep band, and their following, going when many others have stopped. Asylums are the ground-stomping stallion of the stable that is Cool Thing Records, a creative collective of relentless DIY happen-makers based in Southend, a seaside town with an illustrious musical history of working-class trouble-makers and dreamers.

Plugging into the universal WTF, and still frothing with the fire that makes their live gigs feel like a javelin attack of lightning-bolt joy and rollicking effervescence, Asylums aren’t staring into the abyss, they’re lighting torches. They’re passing them around. They’re telling us to go with them; angry, curious, purposeful, hopeful.

Asylums are the founders of the UK independent record label Cool Thing Records (Est 2014). The home to Asylums, Indian Queens, Beckie Margaret, The Horse Heads, Suspects, Private Jetlag and BAIT. 2020 sees a packed release schedule from the label, with Asylums leading the charge.