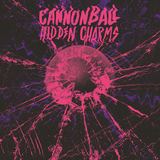 “With strained, characterful vocals that could be likened to any of rock and roll’s legends and danceability that comes from somewhere deeper than the electronic thuds we’re used to, Hidden Charms are a welcome breath of whiskeyed cigarette smoke” – Wonderland Magazine

“As long as young bands are making music like this, rock will be just fine.” – Pigeons & Planes

Hidden Charms have announced the forthcoming release of their new single Cannonball, with a fresh sound to carry them into a busy summer of festival appearances. The track, following on from their hugely successful 2015 single Love You Cause You’re There released on Deltasonic records, sees the band branch into new territory, having cut their teeth on touring the country’s best loved rock n’ roll venues for the last two years they’ve arrived at something totally unique. They have moved away from their traditional psychedelic style and waded into deeper waters, discordant guitar twangs tie together the visceral vocals. It’s obvious that Cannonball hints at a new chapter altogether for the band, and one that won’t sound like anything you’ve heard before.
The London outfit, comprising of Vincent Davies (vocals/guitar/bass), Ranald Macdonald (vocals/keys), Josh Lewis (guitar) and Oscar Robertson (drums), have already gained a fierce reputation for their live shows with support slots for Benjamin Booker, Hanni El Khatib, X Ambassadors and YAK over the last 18 months alongside a four-week Club NME Koko residency.
Having received widespread airplay from the likes of Zane Lowe (Beats 1), Annie Mac (Radio 1) and Huw Stephens (Radio 1) and earned slots at the likes of Isle Of Wight Festival, Kendal Calling and The Great Escape this summer, Cannonball undoubtedly arrives at the ideal time and looks set to attract plenty of fanfare in the next few months.
Hidden Charms’ Cannonball, produced by Mr Chop (production credits include MF Dooms/Stones Throw Records), is now available to stream on Spotify and will be available to purchase on iTunes now.