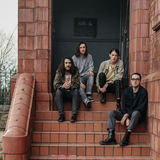 Emerging from the nooks and crannies of Leeds’ fiercely independent DIY scene and counting the city’s renegades, reprobates, and rascals among their friends and foes, Chest Pains are all set to unleash debut single ‘Petrified’ on a wildly unsuspecting public. Be scared? You ought to be.

“My inspirations lie within day-to-day social encounters that spark an emotion within me, whether that's anger or anxiety” declares singer and guitarist Sammy Robinson “As soon as that something happens I just write lyrics straight away. 'Petrified' is about a long-distance relationship whilst 'Shame' refers to the narrow-minded people who live in my home town, the town itself and how it's basically frozen in time.”

Fearless in their creativity and telling it as it is, Sammy, and fellow young guns Cal Crombie (Lead Guitar and Backing Vocals), Sam Robinson (Bass), and Calum Coleman (Drums) breathe and quite literally, live music. Meeting in the city’s well-worn edges at CHUNK – a former warehouse, now not-for-profit music-arts space run by a collective of creatives - the band rehearse in the place which first brought them together. In fact, when not playing or performing themselves, they can often be spotted among the crowd at the venue’s many shows and, just like any club worth being part of, Calum is proud to be a fully-dedicated member of the CHUNK clan. No newsletters, badges or weird initiation ceremonies; just a passion for making noise and rousing a crowd.

“Leeds is great,” Calum says. “Everybody is very welcoming and we think of CHUNK as our home. The members and friends put on loads of gigs featuring bands you might not see in other venues and we provide a safe space for people to have fun!”

“We put on an all-dayer earlier this year to raise money for local mental health charity, Volition. That was pretty nuts, the room was rammed and everyone was just having a good time!”

Through the creative space and their endeavours, Chest Pains have discovered new connections with other like-minded partners-in-crime, alongside whom they continue to channel their sonic desires. “We played with L.A Witch and still chat with them often, even though they're based out in America,” tells Sammy of the collective’s recent recruits. “We also play with Yowl from London who are good dudes and are planning a few bits with Dead Naked Hippies too - definitely one of Leeds' best new bands.”

Offering the perfect introduction to Chest Pains, ‘Petrified’ and ‘Shame’ shimmer with a dousing of Iggy & The Stooges noir as well as the raw spirit of Thee Oh Sees – some common ground amongst the band’s disparate musical tastes. From the split-personality of driven grooves which spiral out of control before giving way to mixed-up tempos, both tracks were recorded with Tom Orrell at the city’s The Nave studio, and the finished product was exactly what the band had in mind. “Tom was super easy to work with and kept the environment very calm and chilled out,” Cal says. “He had seen us live and knew exactly what sound we wanted to capture. That man knows his shit!”