TUNE MJ Hibbett & The Validators - The Lesson Of The Smiths 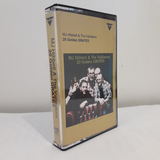 One of the many HITS available on our "20 Golden GRATES" cassette!

As with so very many of my songs this is based on something I have been saying in the pub for YEARS - indeed, when I told Tom about it the first time he said "I was wondering when you were going to get around to doing that" as I had BERATED him with the idea ever since I'd known him.

The final push to write the song came in February 2003 when I went on the massive Anti-War March in London which ends up being mentioned in the final verse. It was an inspiring day, but I spent a lot of it getting annoyed because in amongst the thousands and thousands of people outraged at the wrongs being done in their name you'd see tiny little groups with their own very different agendas, trying to claim some of the credit for this mass outpouring of anger for their own personal causes. It's the sort of thing that made me stop going on marches back in the early nineties - wherever you went there'd always be a member of the SWP handing out placards, with their own party name usually taking up at least half as much space as the cause they were shouting about. I'd also had some bad experiences earlier on as a student, when every political movement I got involved with got taken over by more SWP people who wanted to divert it towards their own aims. I distinctly remember sitting in my last meeting about Poll Tax protestations, alongside people of various political persuasions who'd all united to fight against this single unjust taxation, and being stunned to be lectured by the two leaders (although they'd never call themselves that - they bossed everyone else about, talked over all other opinions, but would never assume to be a leader) about how we should extend our focus beyond this single issue into, say, The Situation In Lebanon.

They were responsible for me giving up on Student Politics and, I always thought, also responsible for turning many more people away from getting involved in Left-Wing politics as a whole, giving Thatcher and her ilk an easy target and depriving the rest of us of a decent alternative... but then that's a rant for another day and, indeed, another song. Suffice to say seeing them all again brought back angry memories and made me want to just get away, and I had to keep reminding myself of my own advice re. The Smiths which I had "shared" so often with others.

I thought about this for a couple of days afterwards and it suddenly struck me that, rather than make the whole song a bit of a joke, I could use it to make a fairly serious point about How We See Things. Initially this was going to be part of "The Epic", a hugely long song that I was intent on writing when I'd first moved to London, but luckily I saw sense and stuck to the main point as intended.

The second verse, by the way, is also completely true and is yet another thing I've banged on about to people in the pub over the years - seeing Take That play at The Brits, when they did "Back For Good" for the first time ever was a revelation to me. "It doesn't matter what other people think!" I thought, "I like it, and that's all that matters!" I've tried to stick by that truth ever since, and have the Daphne And Celeste album to prove it.

The song got into my live set almost immediately, and stayed there - I've played it more than nearly any other song since then, and there's a version on my live album The Uberset, so it's strange to think of it coming out as a "new song". It was the second song I ever finished writing when I came to London and it was all done well before This Is Not A Library even came out. I was booked into Memphis on April 30th 2000, in theory to do some mastering, but ended up recording some extra songs instead and the demo of this was one of them.

It's thus a mighty relief to finally have it properly released in a version with The Validators. As with several other songs we spent a little bit of time working out how to play it "differently" and the rockabilly style you hear today came about fairly easily. When we first started practicing new songs we tried having separate sessions for Rhythm Section and Front Section, but only had one of the latter just because it was hard to work out what me, Tom and Emma could do without something to sing and play along with. My main memory of that night was trying to work out some words for Emma to sing, and in the end we had to ring Tim for help.

It's taken a long time to come out, as I say, but it's also been one of the main beneficiaries of our Learn The Songs Before We Record Them policy - for instance, the stops on the "Peace And Love" bit arrived after several gigs, and the whole idea for the end section took ages to turn up. It's nice though, isn't it?