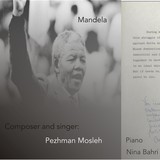 A song for Mandela, 5 December the death anniversary of Mandela:

"The sun shall never set on so glorious a human achievement!" (Mandela)
....
"When Mandela passed away, the long walk to freedom will be longer and harder. I wish with my tears that every parent tell about Mandela to their children, shall their children grow up firmly and with faith.”
_Professor Pezhman Mosleh_

5th December is the death anniversary of the great man of history and the myth of freedom, Nelson Mandela who tried and struggled for liberality and equality all of his life, who suffered of pain and grief, who forgave but never forgot. Before being a man of political morality he was a man of humanity.
There is a beautiful song (“Mandela” song) which was appreciated by foundation of Nelson Mandela when Mandela was alive and he also listened it. It also was broadcasted by South African Broadcasting Corporation (SABC) and so many various countries. This song (“Mandela” song) is the first Persian song for Mandela by International composer and musician Professor Pezhman Mosleh.
https://archive.fo/nSU98
http://artmatters.info/tag/pezhman-mosleh/

According to (1 in music) in UK, “the heartfelt composition is orchestrated in a way and also includes extracts of Mandela’s speech giving the full thing an anthemic strength with a mixture of authentism and emotion.”

Some description about Professor Mosleh’s biography and works in various radios:

New York, NY (Top 40 Charts) site introduces him: https://tr.im/1TskC
Pezhman Mosleh is a composer, singer, poet, professor of cinema philosophy and aesthetic and a scholar in music history who has humanity and philosophical concerns. He is also known as a peaceful composer.
He is a musician who has given speeches in different universities with the topic of “Being I, philosophy and cinema” and “Music, anti-war, a way to conversation” and “Thought in Art”.

Italy, Antiwar songs has written:
Professor Mosleh is a pioneer in Iranian neo romanticism style. And according to SABC News he is inspired by Beethoven and Chopin in composing music. Cinema press journal introduced him as a philosophical artist and Iran Newspaper No.: 5422 on 24th of July 2013 in an article of peaceful melody presented Pezhman Mosleh as a musician who takes steps in the way of struggling with war and violence along with universal musicians.
His solo and orchestral works were performed in various festivals and he was member of jury in many festivals.

His other works has also attracted the different radios and televisions of the world.
We can also mention the other famous works of him, which is called "Limitless" of the album of "Whispers for peace and love". "Limitless" is dedicated to Krzystof Kieslowski and attracted so many attentions from many countries including Poland and the site of Kieslowski Art and Polish music information center in Poland broadcasted it and it is believed that the music of Mosleh is close to Priesner’s.
Such as:

Pezhman Mosleh has expressed in an interview:
“I'm sorry that famous and known composers have not composed many music for great and loving directors and it indicates that the world musicians don't give themselves the chance of making profound connection with films and so there is no enough music in the grief of missing of great directors, because the notes of a music should come from heart not being ordered.
It is better that a musician communicates with images, the unique images that great directors have made of pain, love, peace, damage of war, incuriosity, obligation and responsibility and… human. Certainly these images influence on their music.
Since a portrayed music can be effective in making the images of great directors as kieślowski and Preisner have been influenced by each other.
Music itself is an unique image and an unique image can make an human music, like a ''Moment'' which disappears immediately but it is effective.
There are the musicians like Zbigniew Preisner in neoromanticism style who has influenced on film score but in my country this style is somehow ignored. End of the style as it is also in minds of its authors, philosophers and musician is briefly human’s sensation and liberalism. I tried in my pieces to avoid from thematic complications of classic musicians by passionate solo notes and silences and also by exposition and dynamics, and invited the audience to contemplate and to be precise.”

New York, NY (Top 40 Charts) has published in continue:
The Performance of the Youngest Soloist- Vocalist of the World, 4Year Old Ava Sadeghipour in the Biggest Concert Hall of Iran

Tulips
Meadow saffrons
Seek your scent
And red poppies ask you:
“Where is the freedom”
The beloved Mandela

I’m with you
O, you, flower of freedom