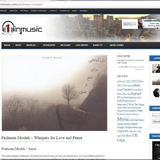 Pezhman Mosleh – Snow
The cinematographic melancholy of Chopin has inspired many, not least your humble host. So it was a definite pleasure to hear it in the original pieces by international Iranian composer Pezman Mosley. Mosley is a Professor of cinema philosophy and aesthetic and a scholar in music history who has humanity and philosophical concerns. He is a pioneer in Iranian neo romanticism, his compositions also reminiscent of the works of another composer, Beethoven, in this beautiful and heartfelt piano piece, Snow. This piece was also aired in the UK on Canalside Radio 102.8FM on the show I Write The Songs for the first time Tuesday the 21st February 2017 and soon available as a podcast.
Nina Bahri has performed this piece by piano.

Pezhman Mosleh – Whispers for Peace and Love
This sound and many such beautiful ones are gathered in a beautiful and peaceful compilation entitled “Whispers for Peace and Love”, the fruit of the recent years he has spent in silence and solitude, studying and searching. The pieces in this album are portrayed and approach film music. Although many of the songs are instrumentals, there is also the occasional singing which is rendered by the very voice of the musician.
The album includes 8 pieces; “Snow”, “Limitless”, “Good remembrance”, “Loneliness at night”, “life”, “Martyr”, “Nameless”, “Dance of wind”.

Pezhman Mosleh – notable Mandela song
He is the first Iranian artist who has composed and sang a song for Mandela which was dedicated to the South African President and activist when he was alive. This notable song was conveyed to Mr. Mandela and Nelson Mandela Foundation who both expressed their appreciation of the work of an author who means to touch the heart of the world. The heartfelt composition is orchestrated in a way and also includes extracts of Mandela’s speech giving the full thing an anthemic strength with a mixture of authentism and emotion. The song has seen broadcast in South Africa on their South African Broadcasting Corporation (SABC), in the UK via the beautiful and humanity program of Wandsworth radio and on Amazing radio.

Pezhman Mosleh – Other works
Mosley was also mentioned in New York, NY (Top40 Charts) and Record Setter (World Records). These noted that: “the youngest soloist-vocalist of the world, Ava Sadeghipour is student of the International Iranian Musician, Professor Pezhman Mosleh who is a stylist music teacher and his method is teaching to the children of 2/5-6 years old and he is the only teacher who has a new method for teaching to 2 years old children, so these children are able to play and sing simultaneously in different concert halls at the age of 4 before so many audience.”
The artist’s relaxing musical works, including the album featured “Whispers for peace and love”, have attracted attention of artists, philosophy professors, psychologists, critics, Iran and abroad press and media such as USA, South Africa, Canada, Nigeria, Russia, Australia, UK, Italy, Switzerland, Sweden, Poland, Netherlands, Denmark, Japan, China, Turkey, Vietnam, India and further.
This lyric and sound embed encpasulate the spirit of the Mandela song and the aspirations of : “Mandela, My eternal man… The scent of your breath, The scent of freedom”