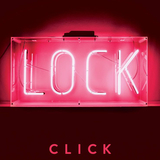 INTRODUCING… LOCK
DEBUT SINGLE ‘CLICK’
OUT JULY 17TH ON RAYGUN RECORDS
"I thought how unpleasant it is to be locked out; and I thought how it is worse,
perhaps, to be locked in…"
Virginia Woolf, A Room Of One's Own (1929)


It's in the blood. Introducing Lock. Sisters Edie and Gita, who release their debut single ‘Click’ via Raygun Records on July 10th. The track is a sinister, slinky, stripped-down showcase for Edie and Gita’s sultry voices.

Edie and Gita grew up with musical Stockholm Syndrome. Members of a large family of musicians, the girls were raised on The Mamas & The Papas, Bob Dylan and The Beatles. They were classically trained at an early age and began performing alongside their other siblings. However, the pair were drawn towards a darker side; in secret they watched and re-watched Betty Blue and Twin Peaks, and fell asleep to the haunting vocals of Julee Cruise.

Come adulthood. Edie worked as a touring musician, singing with Carl Barat and Adam Green, and recording with Mark Ronson. Gita toured as a violinist with The Streets, Beyonce, Jay-Z, Band of Horses, Serj Tankian and many other huge artists.

The results, a suite of dark, wide-screen hyper ballads, inspired by the movie soundtracks of their childhood, the loneliness of touring and the romance of runaways

Fusing the reverb drenched vocals of Mazzy Star, the minimalist beats of The Knife and the soaring melancholy melodies of Susanne Sundfør, Lock couple a universal human vulnerability with a com-manding confidence. These songs live in the mysteries behind closed doors, in the natural darkness of life, in the blood.