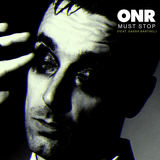 'Must Stop' is ONR's latest release following an acclaimed collaboration with Nile Rodgers earlier in 2020, a partnership that saw the Chic legend say he was "blown away" by the producer's eye for creativity and composition.

This distinctive brand of turning alternative pop on its head travels seamlessly through to 'Must Stop', which arguably sits as ONR's most emotionally impactful single to date.

A track to soundtrack the desperation to be loved, ONR's and Sarah Barthel's vocals play off each other perfectly, building in raw emotion and cathartic outpour throughout as crisp intrumentation soundtracks the song's increasing intensity, culminating in a track that not only goes straight for the heart but will sit with you more and more with each listen.

Speaking about the single, ONR said: “‘Must Stop’ is a song about being repeatedly hurt; about a lack of self-worth, a desperation to be in love and to be loved by someone, anyone – and the blows you can take when you leave yourself so open.

The concept that I had, and the main line of the chorus that everything hangs of, was so simple, and so connected to my own experiences of relationships. I guess what has surprised me is just how much that concept resonates with so many other people in exactly the same way."

Sarah Barthel of Phantogram added: “This song couldn’t have come into my life at a better time. The first time I heard the demo was amidst a messy break up and I think it was the universe telling me I have to express my feelings instead of bottling them up inside. So from then on ‘Must Stop’ has been my mantra.”

Raised on a remote farm overlooking the North Sea in the Highlands of Scotland, Shields began playing music aged six, teaching himself on an old battered piano that lay neglected in his parent’s shed.

Music quickly became his obsession. He discovered his heroes amongst his parent’s record collection – among them, his idol, David Bowie, whose DNA remains intrinsic in everything ONR creates.

ONR soon began to write and arrange his own songs. He was inspired and frustrated in equal measure by his isolated surrounds, and developed an anarchic style of writing and genre-switching production not anchored to any outside influences.

ONR’s studio-obsession eventually manifested itself in to a live show, and he began to tour across the UK, Europe and US, being tour support for acts such as Bastille, Lewis Capaldi and Jake Bugg, and being selected as one of BBC Introducing’s Great Escape picks, BBC Radio One’s and more.

When the COVID-19 lockdowns struck across the world, ONR’s comfort in isolation proved to be a key attribute for him. The enforced remote collaborations that had struck other musicians was something he had been unconsciously preparing for years; suddenly, the world was working out of his studio.

His newest track, 'Must Stop', features Sarah Barthel of Phantogram. It is a track about the desperation to be in love and to be loved by someone, anyone – and the blows you can take when you leave yourself so open.